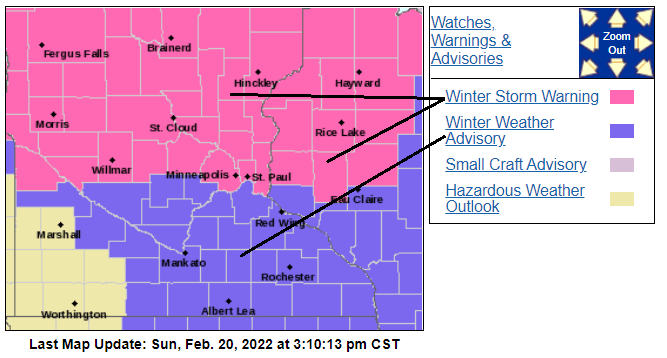 There were plenty of 40s in the southern third of Minnesota and western Wisconsin on Sunday:

I’m sure a lot of people enjoyed the heat on Sunday, but snow lovers will be happy to hear that clearable snow is heading into Monday and Tuesday.

Snow is expected to spread to Minnesota and parts of Wisconsin Sunday evening and Monday, then persist through much of Tuesday.

The National Weather Service included the northern half of the Twin Cities metro area, much of central Minnesota and parts of western Wisconsin in a winter storm warning Monday and Tuesday:

The winter storm warning and winter weather advisory begins at 3 p.m. Monday in the Twin Cities metro area and continues until midnight Tuesday evening. Advisories and warnings in western and central Minnesota begin at midnight Sunday evening and continue until 6 p.m. Tuesday.

Central Minnesota and parts of northwestern Wisconsin could see more than a foot of snow over the two-day period. Portions of the far northern metro could see 8 to 10 inches of snow, with the bulk of snow Monday evening and Tuesday. The winter weather advisory for the southern part of the metro area and southern Minnesota is for less snowfall amounts Monday and Tuesday; usually 4 to 6 inches for the total of two days. There may also be light freezing rain or freezing drizzle at times.

Here are the snowfall amounts forecast by the National Weather Service for Monday and Monday evening:

And here are the snowfall amounts forecast for Tuesday:

Here are the forecast snowfall amounts for northeastern Minnesota and northwestern Wisconsin from Monday through Tuesday:

There are winter weather advisories and winter storm warnings in eastern North Dakota and northwestern Minnesota Monday through Tuesday:

Here are the forecast snow totals for two days in northwestern Minnesota and eastern North Dakota:

Some locations will see highs on Monday at 1 or 2 a.m. Monday’s DST highs will range from single digits in the north to 20 in southeastern Minnesota:

Minneapolis-St. Paul International Airport has not seen a single day with 4 inches or more of fresh snow since December 10, 2021. MSP Airport recorded 11 inches of snow that day.

You make MPR News possible. Individual donations drive the clarity of our reporters’ coverage across the state, the stories that connect us, and the conversations that provide insight. Help ensure that MPR remains a resource that brings Minnesotans together.

Donate today. A donation of $17 makes a difference.