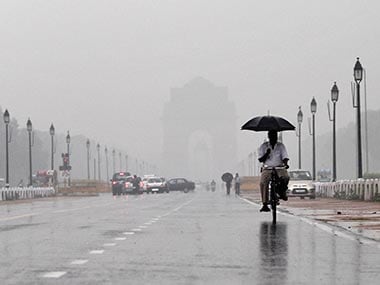 Winter Is Finally Retiring, But The Rain God May Still Make A Surprise Visit To Some States

Delhi-NCR will witness a sharp rise in temperature in the second half of next week; the daytime temperature could climb between 25 and 27 ° C by Wednesday

Winter finally seems to be receding. That’s the feeling for the past few days, although daytime and nighttime temperatures remained below normal on most days, except on the west coast where a sharp increase in daytime temperature is observed.

Between February 5 and February 12, clear and dry weather persists in central India and almost no significant rainfall has been recorded in Gujarat, Maharashtra and western Madhya Pradesh, while parts of eastern Madhya Pradesh and Chhattisgarh experienced showers mid-week.

Due to the passage of moderate western disturbances, the Himalayas recorded light to moderate fresh snowfall and parts of Rajasthan, Haryana, Delhi and western Uttar Pradesh experienced rain and moderate thunderstorms; some places in the region reported hailstorms causing damage to rabi crops. Following the passage of the system, the weather is very clear and sunny, raising daytime temperatures above 20°C, bringing much-needed relief to residents after a long harsh cold in January and early February.

In eastern India, except for some light rains in isolated places which are recorded on February 10, mostly clear weather is observed the rest of the days.

The southern peninsula started the week on a warm note with summer daytime temperatures in Tamil Nadu and Kerala, as well as parts of the west coast, with daytime temperatures well above 35C. Later in the week, a weak trough is observed in easterly winds at 0.9 km above mean sea level on the coast of Tamil Nadu; Strong northeasterly winds prevail on the southern coast of Tamil Nadu, bringing moderate to heavy rains to the delta over the past two days.

Some moderate to heavy rainfall figures from stations in southern Tamil Nadu ending at 8:30 a.m. on February 12:

Delhi’s Safdarjung Observatory recorded rainfall of 16.8mm until 8:30 am on February 9, with that rainfall mark breached by 100mm! Seasonal winter rainfall so far is 106.8 mm since January 1, 2022.

Forecast from February 13 to 19

• Weak western disturbances will affect the Himalayas on February 15 and 16; light snowfall will result over parts of Kashmir, Ladakh and Himachal Pradesh. The first system will have no impact on the plains of northern India, but it will change the direction of the wind; The south will cause daytime and nighttime temperatures to rise in the region and usher in the onset of spring as early as mid-February.

• Moderate disturbance from the West approaching the Himalayas from February 17 to 19, widespread moderate to heavy snowfall is forecast during this period on the hills and some impact in terms of rainfall can be expected in limited areas of plains.

• Due to the change in wind direction during February 15 and 16 and the induced instability of the lower levels with increasing temperature, this could lead to cloud formation in parts of the eastern part of the Madhya Pradesh and Chhattisgarh; light to moderate showers may occur.

• In the presence of a slight trough in the easterly winds, moderate rains will continue in southern Tamil Nadu on Sunday and Monday and will decrease significantly; Hot weather will return to most parts of Tamil Nadu, Kerala, Andhra Pradesh and Telangana by the middle of the week.

Weather forecast by region from February 12 to 19

• Strong northwesterly winds from February 13 to 15

• Weak western disturbance over the Himalayas on February 15 and 16

• Moderate disturbance from the west from February 17 to 19.

Weather forecast for the hills

Due to the impact of low cloudy skies of the Western Disturbance, light snowfall is expected in Kashmir, Ladakh and Himachal Pradesh from February 15-16.

In quick succession, another western disturbance will affect the Himalayas from February 17-19. This system will bring moderate to heavy fresh snowfall over Kashmir, Ladakh, Himachal Pradesh and upper reaches of Uttarakhand; the lower ranges of the hilly states to witness moderate rainfall as well as hail activity.

Cool nights and very pleasant days with sunshine are expected in Punjab, Haryana, Delhi NCR, Rajasthan, Uttar Pradesh from February 13-15. Overnight temperatures will remain in the single digits for the first half of the week.

Delhi-NCR will witness a sharp rise in temperature in the second half of next week; the daytime temperature could climb to between 25 and 27°C by Wednesday. A disturbance from the west during the period from February 17 to 19 could lead to a sudden change in the weather, especially in parts of Punjab and Haryana, where light to moderate rain may occur as well as risks. of hail activity.

Minimum/maximum temperature forecast for February 13 to 19

Due to the formation of a cyclonic circulation over the lower levels around southeast Madhya Pradesh and moisture supply from the southerly winds, scattered light to moderate rains or thunderstorms are expected in the east from Madhya Pradesh, Chhattisgarh, Vidarbha from February 15 to 16; lightning and hailstorms are also possible.

In the absence of any effective weather system, dry weather is expected in most parts of Gujarat, Konkan, Madhya Maharashtra and Marathwada. Due to Easter on Sunday and Monday, the daytime temperature will remain above 30°C and up to 35°C. A slight drop in daytime temperatures will be observed on February 15 and 16 after the resumption of westerly winds in Gujarat and the Konkan region.

• Fresh winds from the northwest from February 13 to 16

• Mainly dry weather in eastern and northeastern India during this week.

With no significant weather conditions, dry and clear weather is expected in Bihar, Jharkhand, Odisha, West Bengal, Assam, Sikkim, Manipur, Meghalaya, Mizoram, Nagaland and the Tripura from February 13 to 19. Parts of Arunachal Pradesh may experience light to moderate rain due to the impact of western disturbances from February 16-19.

Clear skies overnight and in the presence of northwesterly winds at lower levels will keep the temperature under control in Bihar, Jharkhand and West Bengal; cool nights with very pleasant days. In southern Odisha, expect warmer days this week.

• Weak trough of easterly winds on Sunday and Monday.

• Dry and hot weather in the middle of the week.

• Easter winds will again bring wet weather to Tamil Nadu by next weekend.

Signs of summers, which started in Kerala and Tamil Nadu last week, are now expected to spread to other parts of the southern peninsula. Daytime temperature is expected to increase by 2-4°C in Telangana, Andhra Pradesh due to southerly winds.

Slight increase in daytime and nighttime temperature to be observed in Tamil Nadu, Kerala, Goa, Karnataka From February 15 to 19, daytime temperatures are expected to cross the 35.0 ° C mark in many stations in the south of the peninsula, while nights are likely to be pleasant with minimum temperatures below 25°C in most places.

Light rain and snow will continue over the western Himalayas