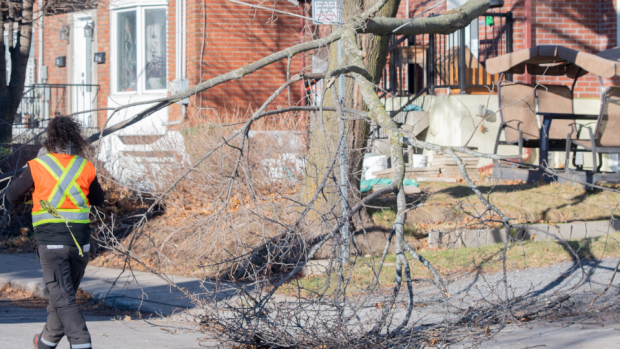 A severe windstorm caused damage and power outages in Ontario and Quebec on Saturday.

The storm then moved towards Newfoundland and Labrador, where it was expected to hit the province on Sunday afternoon.

Here’s a closer look at what happened.

In a while abstract Environment and Climate Change Canada (ECCC) on Sunday said a “strong low pressure system moved over northeastern Ontario on Saturday, bringing snow, freezing rain and wind with it.”

The northeastern part of the province was hit by heavy snowfall and freezing rain, forcing many road closures.

Hydro One said the high winds had caused “significant damage” to infrastructure in the province, including broken poles, fallen trees and dangerous road conditions.

Toronto Hydro did not report any major power outages in the city, but there were still areas where power was cut Sunday afternoon.

Some areas, including Hamilton Airport, Windsor Airport, and Toronto Island Airport, have experienced wind gusts of 100 kilometers per hour or more.

Point Petre, in central Ontario, and Port Colborne, in the southeastern part of the province, had the highest wind gusts on record, at 130 kilometers per hour.

Kapuskasing received the most snow on Saturday, with a total snowfall of 18 centimeters.

Hamilton saw the most rain with 25.4 millimeters hitting the city.

Across the province, residents shared photos of downed trees and power lines.

“The roads were partially or totally icy in several places,” said one. abstract ECCC readings.

The agency said the storm left nearly 400,000 people without power.

In one update Sunday, Hydro-Quebec indicated that more than 600 linemen were mobilized to work to restore electricity.

“We are doing everything we can to restore service to as many customers as possible today,” the agency said. “But we already know that we will have to continue our efforts in the coming days. “

Hydro-Quebec said there was “a lot of work to be done” to clear fallen trees and branches from its power grid and make necessary repairs.

Several areas of the province were hit by freezing rains, which started at 5 a.m. in some places and lasted until 11 p.m. in others, according to the ECCC.

Montreal and Longueuil and Cap-Chat experienced wind gusts of over 100 kilometers per hour.

Shortly after midnight, the Sûreté du Québec reported that a semi-trailer had overturned on Highway 13 in Laval due to strong winds.

“The truck, which was empty at the time of the incident, ended up on the parapet separating the south and north spans (…) at the Bisson bridge,” said SQ spokesperson, Sergeant Stéphane Tremblay. cabin but suffered no injuries. “

A number of wind and rain warnings were in place for parts of Newfoundland and Labrador on Sunday as the storm moved east.

ECCC said the strongest winds would occur around noon on the south coast of Newfoundland from Burgeo to the Burin Peninsula before “weakening slightly” as they moved west on Sunday afternoon.

The agency warned that there could be damage to buildings due to the wind.

With files from The Canadian Press