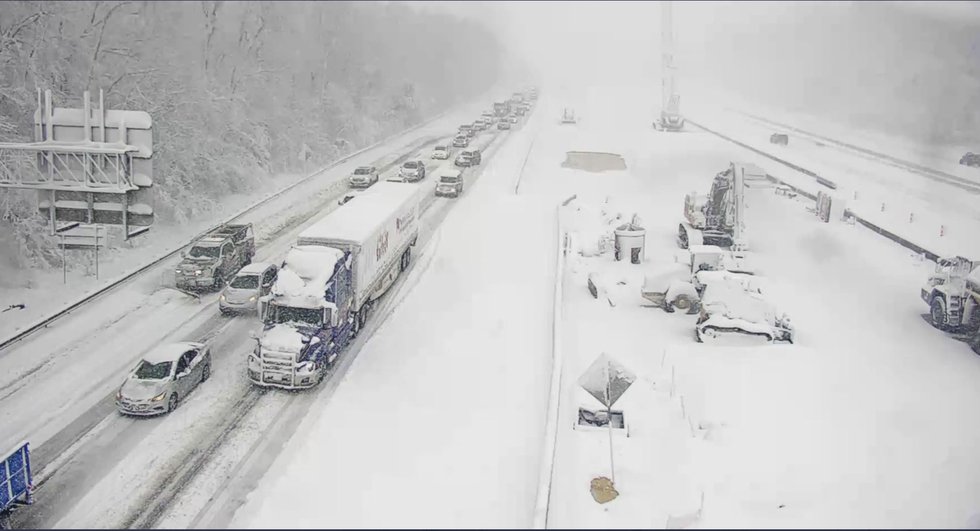 RICHMOND, Va. (WWBT) – The report on Virginia’s response to the January snowstorm and saving I-95 has been released.

On January 3 and 4, hundreds of travelers were trapped on icy and snowy roads for more than 36 hours between Ashland and northern Virginia.

The external review examined the state’s widely criticized response to the chaos.

According to the report’s findings, the Virginia Department of Transportation, Virginia State Police, and Virginia Emergency Management Department were ill-prepared for the magnitude of what happened, and understaffed also hindered some response.

The report found that agencies used a variety of methods to communicate with the public before and after the storm, but messaging sometimes lacked specific instructions.

The findings indicate that the state needs to update how it communicates to the public that travel is too dangerous. Yet drivers also have a responsibility to stay informed of travel conditions during storms.

Warmer temperatures of up to 60 degrees the day before the storm reduced public attention and urgency to the threat of snow, according to the report. The report alleges that the peak of the Omicron Variant COVID-19 and the New Year’s holiday resulted in increased traffic volume on I-95 from people returning home, which impacted the how the VDOT and the emergency services were able to react.

The report also revealed that road messaging and its assembly areas for snow removal could be improved. Additionally, the report states that despite its mobilization efforts, VDOT snowplow operations eventually fell behind as conditions worsened, and downed trees and power lines further impacted trips. The lack of alternate routes between Richmond and DC and impassable secondary roads only compounded the problem.

“VDOT’s top priority is and always will be the safety of the traveling public, and as we learn from each occurrence, this report has highlighted key areas we need to refine in our winter operations,” said Virginia Highways Commissioner Stephen Brich. “Our on-road messaging, staging of snow removal resources and partner engagement are all areas where we are exploring new approaches to improve our response. Above all, we remain committed to better executing our mission to keep Virginia’s transportation system safe every day and in the face of future extreme weather events. “

Governor Glenn Youngkin released the following statement regarding the report.

“This report demonstrates that the storm changed in intensity and left Virginians and travelers stranded on I-95, management of the previous administration did not properly prepare or communicate. Since taking office on January 15, our administration has worked closely with the Virginia State Police, our Virginia National Guard, the Virginia Emergency Management Department and the Virginia Department of Transportation, responding quickly and adequately to every weather-related event and I’ve been incredibly pleased with our execution. We successfully withstood three major snowstorms. We focus on preparation, communication and execution. Virginians can be sure that we are working to keep them safe. »

In a letter to Governor Youngkin, his director of transportation Shepard Miller criticized former Governor Ralph Northam, accusing his administration of doing almost no better communication with the VDOT and VDEM to alleviate the crisis that unfolded on the I- 95.

“Review of this incident revealed that the Commonwealth’s response was overwhelmed by the severity and scale of the storm and the administration did not acknowledge its effects until January 5,” Miller said. “The report states that prior to January 3, no action by storm management was taken to prepare for the possibilities of a more severe event than the initial “probable” weather scenario provided by the external weather service. “

NBC12 reached out to Governor Youngkin’s transportation secretary, Shepard Willis, for comment, but did not hear back.

State Sen. Tim Kaine, among thousands of Virginians stranded on I-95 in sub-freezing conditions, says he hopes the report better prepares the state for the future.

“Being stranded on a frozen highway for dozens of hours is dangerous, and we must do everything we can to avoid another crisis like the one hundreds of Virginians have experienced and I experienced on I-95.” , Kaine said. “I am pleased to see that the Virginia Department of Transportation has completed a thorough analysis of the jam, so that we can improve communication and be better prepared for the future.”

The snowstorm dumped three and a half inches of snow per hour at its peak, making it the heaviest snowfall in the region in the past six years.

Going forward, the report says planning for large-scale closures during winter events should include the following:

You can read the full report HERE.

Want the best NBC12 stories in your inbox every morning? Subscribe here.