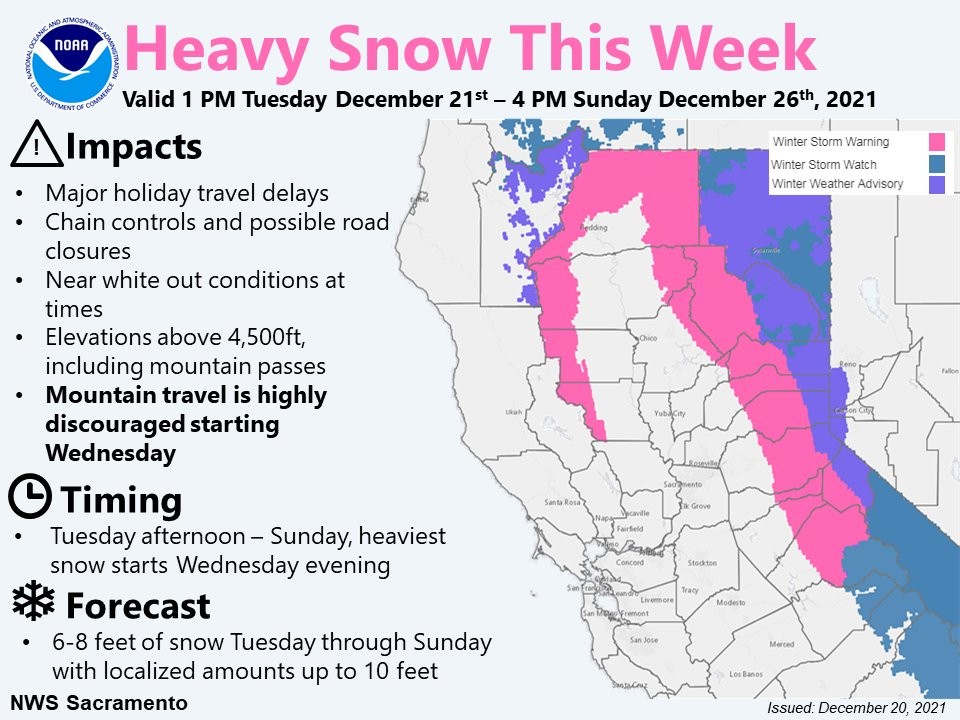 A strong winter storm could drop between 80 and 100 inches of snow in the Sierra over the next week starting Tuesday, which could ruin vacation trips through the mountains.

The storm will also bring a long expanse of rain to the Sacramento Valley, but not like the downpours that passed through last week and into October.

â€œThe best way to describe it is that it’s sort of opening up a storm door that just pushes the continuous rain and snow into California and starts on Tuesday, but really picks up later on Wednesday,â€ he said. Anna Wanless, meteorologist with the National Weather Service. in Sacramento.

A series of winter storms will bring several feet of snow to #NorCal mountains this week. Expect significant travel delays during the holidays, with dangerous conditions expected. The heaviest snow is expected from Wednesday evening through the weekend. Plan ahead now! #CAwx pic.twitter.com/ee6lz1zkpf

Wanless said the impact of the storm would last for nearly a week, from Tuesday to next Monday, December 27. But with the heavy travel expected around the Christmas holidays, more people could be affected than usual.

â€œThese systems that we see happening, it’s not something crazy that we’ve never seen before,â€ she said. â€œIt’s just the fact that they come back one after another and during Christmas week, so we know a lot of people are going to be traveling to Lake Tahoe over the Sierra. So for that reason, it’s going to be quite impactful. “

Wanless said if you have to travel try to get to where you are going by Tuesday or early Wednesday, then be prepared for “chain control, travel delays and have an emergency kit in your car. “.

Caltrans spokeswoman Raquel Borrayo said she would normally recommend people delay their trip around a storm like this, but she knows people are unlikely to postpone their holiday gatherings. If you are traveling, she says be prepared for major delays on Interstate 80 and Highway 50.

â€œI mean, 80 to 100 inches is no laughing matter,â€ Borrayo said. “That’s a significant amount of snowfall in the coming week.”

Although Borrayo said it was possible for highways to be closed due to snow, it is more likely that an accident or stall would block the road. His main suggestion to drivers crossing the mountains this week is to slow down.

â€œWhen we have chain drives on the I-80, the speed limit is only 30 miles per hour,â€ she said. â€œIf you don’t slow down and drive carefully for the weather conditions, you’re more prone to spinning, crashing into another vehicle. And incidents like that, that’s what shuts the down. highway in particular, and really disrupts traffic and causes significant delays. “

Meanwhile in the valley, Wanless with the NWS said you can expect 2-3 inches of rain over the next week.

CapRadio provides a trusted source of information through you. As a non-profit organization, donations from people like you support journalism that allows us to uncover stories that are important to our audiences. If you believe in what we do and support our mission, please donate today.