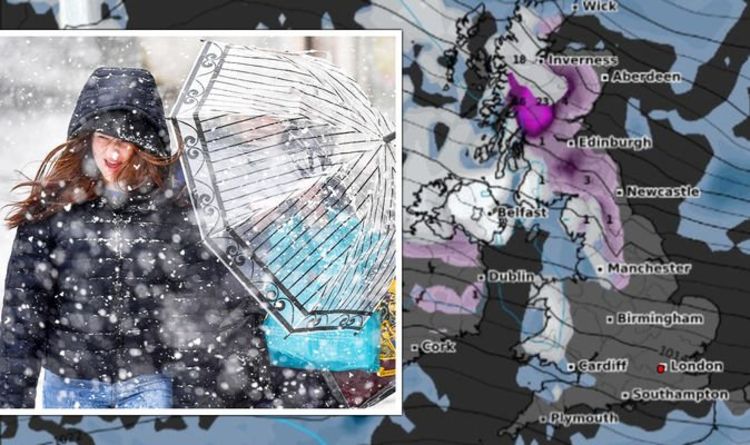 Weather forecaster WXCharts predicted heavy snowfall in mid-February, with the country seeing up to 16 inches (40cm) by February 16. The snow will be mainly located in northern Britain, with most of it falling in Scotland. But the forecaster also predicted snow would fall further south than Scotland, including Manchester and parts of Wales and south-west England.

Speaking to Express.co.uk, UK Meteorological Services chief meteorologist Jim Dale said February snow spells were likely to arrive quickly and with little warning, similar to storms Corrie and Malik, which hit the UK over the weekend.

“It happened for the same reason that I talk about snow as I am.

“It was a pretty quick development, it took 24 hours for the chart to pick it up and show it more of a threat.

“It was a two and a half day window – there wasn’t much in it. And it will be the same with this snow event.

“Snow events and winter events, this far out, we can’t be sure the white stuff won’t come down South.

“These developments, especially at this time of year, can just come in and catch you a bit off guard. So there is every chance for the rest of February to deliver. We are always at the mercy of these developments and it is far too early to say that winter is over.

“The only thing that goes against that is the rising sun right now. It’s brighter and even when you’re out in the sun on a day like this, it’s a bit warmer

“And because we saw a shortage of it, which is to say not a lot at all in December, it is late.

“So yes, you can see snow on the different maps.

“Primarily, it is the Highlands and the Grampians, the Scottish regions that see the majority.

“There are some coming later this week that will start to add to what is a pretty thin pile. That’s the start.

“It takes time for the second phase to kick off and some of that tends to spread out into the northern parts of the UK – mainly the Hills, Pennines and Cleveland Hills.

“The jet stream is above us and it’s bringing this cold air – it’s basically the Nortwesterlys doing the damage in terms of cold weather.”

But he added: “We’re going to have to watch the pointy end of these in the event of development that actually pushes further south into the more populated areas, by this I include Glasgow and Edinburgh and everything from that point on. to the south.”

Mr Dale also said skiers in the Scottish mountains are likely to be happy with the weather ahead.

He said: “What I would expect to see – for skiers in this world – the Highlands and Grampians will see a much better end to the season than they have seen recently.

“It was a good start, a bad middle and it could be a good ending.

“If you’re looking for snow, these Scottish mountains are going to see more and more of it as the month unfolds.”