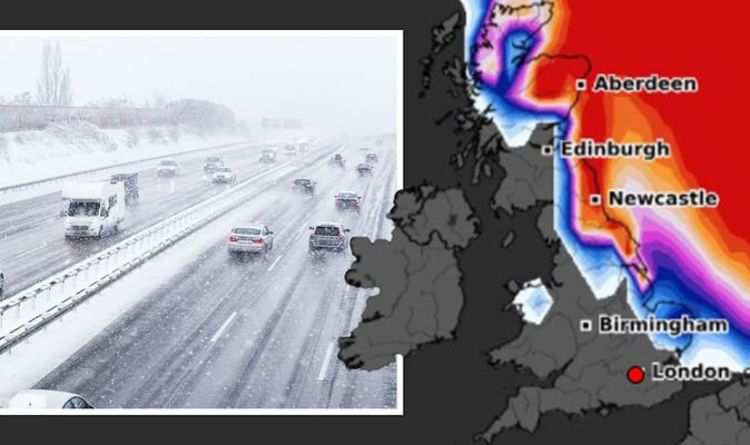 Meteorologist WXCharts has predicted a 95% chance of snowfall in parts of the UK including Aberdeen and Newcastle. Minimum temperatures are expected to be between 0C and -2C on Thursday and Friday.

UK Meteorological Service chief meteorologist Jim Dale has warned that “winter is not over” as the “coldest parts of the year” are yet to come.

Speaking to Express.co.uk, he said: “As we approach the end of the month – the coldest parts on average of the year – what we are seeing is the high pressure that is ‘ moves away from the south and west, allowing a north-easterly air current to enter.

He added: “So to what extent does this actually happen, and whether or not we get a proper dip, depends on a little battle going on – does it end in Denmark, Germany or the thrust crosses and affects the eastern parts of the United Kingdom and up to the London area.

“But I would say at the moment that winter is not over, let that be absolutely clear.

“We are only halfway through and the coldest part of the year is normally reserved for the end of January and February.

“So there is plenty to play for.”

Later tonight the Met Office predicted “a widespread freeze for much of England”.

He added: “Thursday is generally sunny but cold, after freezing in places at the start.

“Most areas see plenty of winter sunshine, but northern Scotland, west Wales initially and the east coast south of the Humber in particular continue to see showers.

“Some will be wintry giving snow on the hills, but it will tend to fade during the day, especially in the West, as the pressure increases sharply.

“At first, a very strong northwesterly wind, violent in the east, will slowly decrease, but temperatures across the country do not exceed around 4 to 8 ° C.”

But looking ahead to late January, the Met Office predicted temperatures are likely to be “slightly above average”.

Their long-term forecast for January 24 to February 2 reads: “During the remainder of the period, rain or showers at times for the north, with stronger winds mainly confined to the far north, although at times bringing choppy conditions more to the south.

“Temperatures are expected to be around or slightly above average.

“Conditions will likely remain similar into early February, with drier than average conditions for the most part.”

1 to 2 inches possible for Thursday