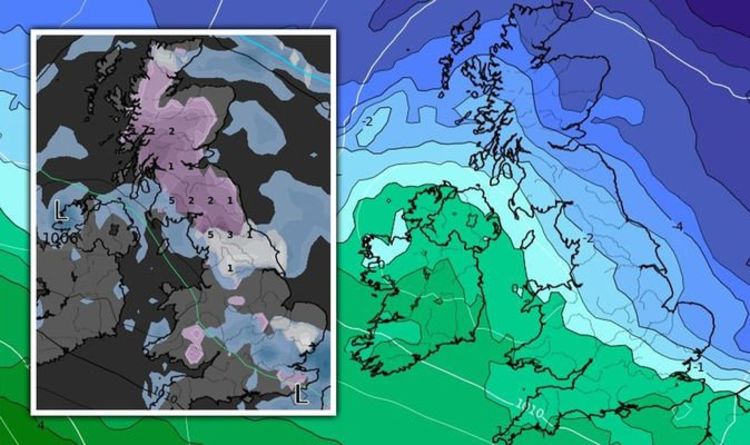 Forecasters and charts argue that until December 26 the weather in Britain will be “settled” with temperatures “slightly above average”. But at the end of December, charts show a wet and windy weather front will arrive from the southwest and a snow bomb could hit the UK.

From December 27 to January 2, Netweather.tvs forecasts indicate that there is “potential for snowfall”.

Their prediction was as follows: “Confidence is lower for this period, but there is a higher chance that colder weather will come from the east at some point during this period, because the higher pressure is moves further north, most likely to Scandinavia.

“So there is a potential for snowfall, but not a certainty, because it all depends on the specifics of the wind direction and the extent of cold air masses on the nearby continent.”

Jim Dale, a meteorologist for British Weather Services, also told The Sun that a “perfect recipe” for the warm waters of the North Sea and a cooling La Nina of the Pacific after a placid fall would be the cause of the choppy weather.

He told the outlet, “We expect another major storm this month that will set the trend for the months to come.

“We expect five to six storms to strike over the winter period, which could be severe enough to merit a name.”

WXCharts maps show that after Boxing Day conditions will start to deteriorate in the UK, on ​​December 27 at midnight seeing up to 3mm of rain per hour hitting the southwest.

At 6 p.m., maps predict rain will soak much of Ireland, as well as the west coast of Wales and Cornwall.

However, in North West England up to 1cm of snow will fall in an hour, and more overnight.

On December 28 at midnight, up to 2cm of snow per hour is expected to fall over much of the North West and South of Scotland, as well as in Southampton and Cardiff.

Despite forecasts of a snowy end of the year, forecasters have poured cold water on hopes of a White Christmas.

Netweather forecaster Terry Scholey wrote: “We have a more comfortable feeling to enjoy over the next few days, but with the air off the Atlantic very humid we are likely to see darker weather at times and foggy, which can be common at this time of year.

“A front marks the border between very mild weather in the center and the south and less favorable conditions further north.

“As a result, much of Scotland and the far north of England have started off dry and well, where it will be sunny this morning. But it’s a cooler start here, with a touch of frost on the sheltered eastern parts of Scotland in the first place.

“The front moves north throughout the day, soon bringing rain and a southerly gale to Northern Ireland, with all but northern Scotland seeing rain and chilly winds. before the end of the day.”

Long-term forecasts from the BBC and the Met Office also dampened hopes for snow on Christmas Day.

“Temperatures may be near or slightly above average for this time of year, but some colder interludes can sometimes pose a risk of freezing.

“The last week of December and early January should remain calm, with an increased risk of frost and fog during the brighter times over Christmas and around New Years.”

Meanwhile, the BBC said: “During Christmas week the high pressure is favored from north-western Europe to south-eastern Europe, with lows now further north of the UK. United.

“This would lead to a calmer and a bit drier pattern, especially in the western regions and Scotland.

“Temperatures generally close to the season are expected this week, but perhaps slightly below average in Wales, Scotland and the west of England.”