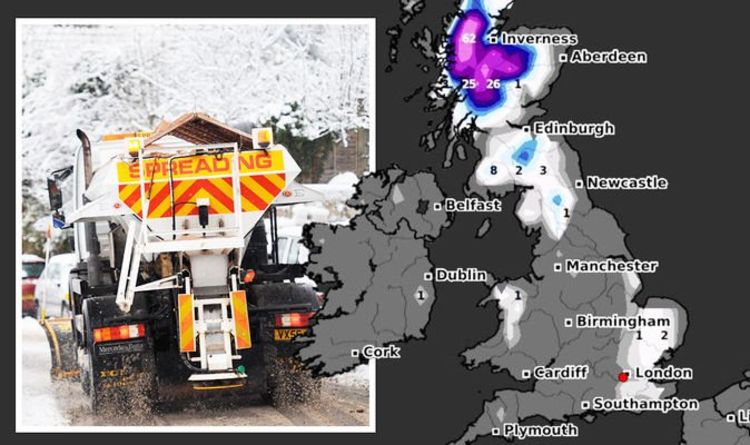 Snowfall has been largely confined to parts of Scotland and the northern tip of England, but this month southern parts of the UK could also face wintry conditions. WXcharts shows that snow is expected in the south of England over the weekend of February 19-20.

He told Express.co.uk the ‘current risk’ for the coming week and a half would be between two and three centimeters of snowfall in northern parts of the UK, but more than ten times that for mountainous regions of the country as More than 30 centimeters of snow are expected.

He added the “risks of snow [are] intensifying for the northern regions”, before sweeping “beyond Scotland” and “accumulating within Scotland itself”.

On Tuesday there will be between one and five centimeters of snow in parts of north-west Scotland before the forecast climbs to between 10 and 15 centimeters on Wednesday across a wider part of western Scotland.

On Thursday, more of Scotland will brace for snowfall, which among the highest regions will be over 30cm deep.

This will decrease over the weekend and early next week, before making a comeback across the UK by Thursday February 16.

By Sunday February 20, most of the UK will see patches of snow spreading all the way down the east coast to the capital.

READ MORE: Horror as bus overturns with 67 students on board

“Colder conditions in the north, ahead. Winter showers and windy in the north. Widespread frost overnight by Friday.

As for the following week, they predict snowfall and soggy weather, with some areas escaping snowfall with “mild” temperatures.

They added: “Unstable conditions are expected to continue.

“The wettest weather is likely to be in the west and northwest, at times muggy, while the south and southeast remain the driest, but even here it’s likely to rain at times. .

“Snow is expected on the northern hills and temperatures becoming average to mild in many areas.

“It’s also likely to get windy for everyone, especially in the north.”

White Valentine’s Day and polar freezes of -5°C, with February being the coldest month in winter