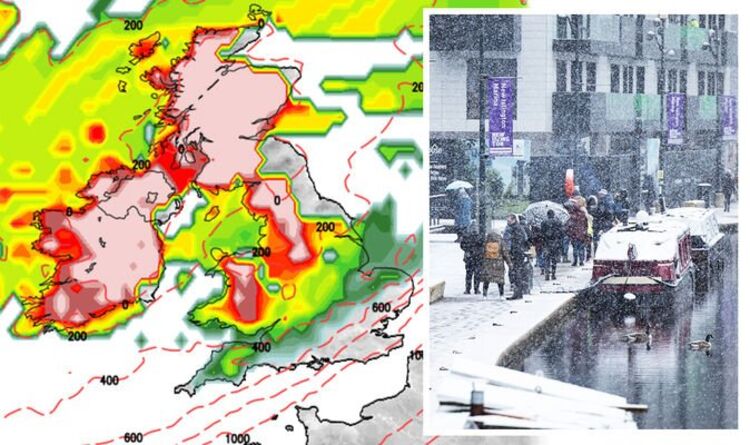 A brutal storm coming in from the Atlantic could yet earn the season’s seventh name – Gladys – and will carry a plume of arctic air across Britain on its tail.

Government forecasters have issued warnings for parts of the UK up to a foot of snow as eruptions of thunder and lightning during blizzards threaten loss of power, mobile phone blackouts and the travel chaos.

The Met Office has an unusual ‘snow and lightning’ warning in effect until tonight and much of tomorrow.

A spokesperson said: “Temperatures across Scotland and Northern Ireland are expected to drop sharply after a band of squally rain on Wednesday, with frequent heavy and windy snow showers arriving from the Atlantic.

“There is a small chance that some of the showers will be accompanied by frequent lightning, which could impact power supplies, including in some places outside the warning zone.”

Separate warnings are in effect for strong winds on the UK’s eastern flank, while heavy winter showers could dump up to a foot of snow on higher ground.

The biggest downpour is forecast until the early hours of Thursday, when gusts of up to 70 mph threaten to bring crippling blizzards.

While government forecasters have yet to name a seventh storm, forecasters say the next low pressure system to hit Britain could be strong enough to breach the threshold.

Jim Dale, meteorologist for British Weather Services, said: ‘It’s up to the Met Office to name these storms, but Gladys may well be waiting in the wings before the end of the week.

“During the second half of the week, there will be potential for another bout of strong winds as a low pressure rolls in from the Atlantic.

“We are also looking at a double-edged sword in terms of winds accompanied by snow.

“It could fall across Scotland and northern England, often driven by high winds.”

He warned Britain could be in the crosshairs of a full-scale spectacle to unleash the most powerful blast of the winter yet.

He said: “Many parts of the north are at risk of seeing significant, accumulated snow, and there is potential for multi-foot accumulations in parts of the far north and in many rural areas.

“There will be a growing risk of something wintery hitting southern areas, and these could reach lower levels on Thursday.

“On these current projections, we look set for the snowiest blast this winter to hit within the next day or two.”

Ground temperatures could reach -12C in parts of Scotland with lows more widely between freezing and single digits.

Netweather forecaster Jo Farrow said: “The cold front will still be over south east England and East Anglia around dawn on Thursday.

“It could hold freezing rain or even wet snow on the Downs, but it is moving away to the east.

“Behind in the good cold air there will be heavy snow showers over northern England, again from the west and a mix of rain, with sleet and snow showers for Wales and the South West of England.”

This caps off a week of weather hell that started with Storm Dudley and the killer Storm Eunice before last weekend.

The bad weather was brought on by the jet stream which, with an unusually ferocious 200mph core, steered relentless storms from the Atlantic.

The jet stream changed position, the result being over the next few days to allow in colder Arctic air.

John Hammond, Meteorologist for Weather Trends, said: “The next low pressure system is bringing strong winds and heavy rain on Wednesday night and Thursday and that could be disruptive.

“Thursday seems, for a time, not very pleasant at all.

“We will see high winds, winter showers and snow to low levels.”