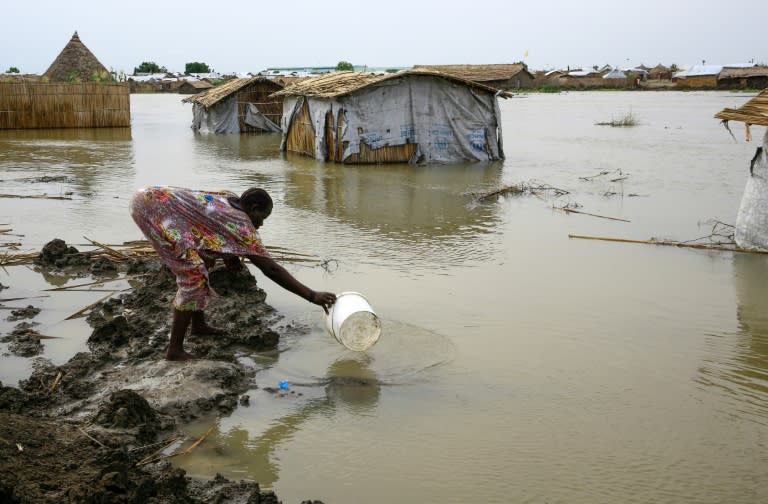 Helping vulnerable countries cope with the multiplier effect of climate change on droughts, floods, heat waves and tropical mega-storms will require billions of dollars, not the billions currently on the table at COP26, reveals a draft UN report obtained by AFP.

The failure of rich countries to keep their pledge to deliver $ 100 billion a year to vulnerable countries became a flashpoint during UN climate talks in Glasgow, entering their final hours on Friday.

But the real cost of allowing the atmosphere to keep warming will be much higher.

The draft report of the Intergovernmental Panel on Climate Change (IPCC), scheduled for release early next year, shows the $ 100 billion figure is nothing more than a down payment on what is needed to prepare for the inevitable impacts.

Flooded cities, food shortages, deadly heat and massive migration will all drive up the price.

â€œThe costs of adaptation are considerably higher than expected, resulting in a growing ‘adaptation finance gap’,â€ reads a 4,000-page summary of the report.

“The existing governance arrangements for adaptation finance are inadequate for the expected magnitude of climate impacts.”

The Earth’s surface has warmed by 1.1 degrees Celsius from pre-industrial levels so far, amplifying extreme weather conditions across the planet.

And the world is on track to exceed the Paris Agreement target of limiting heating to between 1.5 Â° C and 2 Â° C.

Even taking into account a new round of carbon reduction commitments this year, the Earth’s surface will still warm to a “catastrophic” 2.7 Â° C, the UN has calculated.

The higher the temperature rise, the higher the costs of protecting society against the climate cataclysm, warns the IPCC, the world’s highest authority on climate science.

It indicates that by 2050, the financing needed for adaptation could reach $ 1 trillion each year, under certain emission scenarios.

At two degrees of warming, adaptation costs in Africa alone are expected to increase by “tens of billions” each year.

Many scientists, including some of the report’s lead authors, regret that its findings were not released before the crucial climate meeting in Glasgow.

In the meantime, experts and diplomats have started to draw up results well above the figures on the COP26 negotiating table.

The ten-year pledge to provide $ 100 billion a year by 2020 – now postponed to 2023 – aimed to help climate-vulnerable countries green their economies and prepare for inevitable impacts.

But what seemed like a large sum in 2009 seems paltry today.

“This pledge of $ 100 billion is seriously broken,” said Rachel Cleetus, economist at the Union of Concerned Scientists.

“The science and the realities on the ground have gone beyond what the engagement was supposed to do,” she told AFP. “When we talk about post 2025 funding, it really has to run into the trillions.”

Mohamed Adow, director of the Power Shift Africa think tank in Nairobi, told AFP that the $ 100 billion “does not even scratch the surface of the real needs of the developing world.”

“Adaptation is a huge blind spot when it comes to dealing with the climate emergency.”

The urgent need to step up against climate impacts – which will be severe even with a warming of 1.5 Â° C – is highlighted by the projections of the IPCC draft report on the dollar damage that rising temperatures will inflict on virtually all sectors of society.

In a single low-lying city, Guangzhou, in southern China, estimated losses could exceed a quarter of a trillion dollars a year without adaptation measures – such as massive flood defenses – with one further rise. from sea level by 20 centimeters.

With 2 Â° C of warming, the oceans are expected to increase by almost twice as much.

In the worst-case scenario of uninterrupted warming, Guangzhou’s annual damage could exceed one trillion dollars. Other low-lying cities such as Mumbai – with fewer resources – would face a similar level of devastation.

Floods will displace, on average, 2.7 million people in Africa each year by mid-century, staple crop yields will decline as well as nutritional value – raising the specter of widespread malnutrition – and heat waves will reduce productivity and strain health systems.

Adaptation finance is best viewed as an investment in avoided costs, according to the IPCC report.

Spending $ 1.8 trillion, for example, over the next decade on early warning systems, climate resilient infrastructure, agriculture, mangrove conservation, and improving access to food. water “can generate net benefits of $ 7.2 trillion” – a benefit-cost ratio of 4 to 1, he said.

“Investing in climate adaptation is a bit like buying insurance for a known event,” said Brian O’Callaghan, senior researcher on the University of Oxford’s Economic Recovery Project and author of the report. Recently released United Nations Environment Program Gap adaptation.

Adow and others have called for a “special report” from the IPCC to quantify global adaptation, just as the policy advisory body has done to measure the impacts of global warming.

“We need to make as objective an assessment as possible of the costs of both adaptation and mitigation,” said Max Puig, chief negotiator for the Dominican Republic.

UNEP’s Adaptation Gap report released earlier this month indicates that financing needs would reach nearly $ 300 billion per year by 2030, rising to $ 500 billion by 2050.

At the start of COP26, the African Group of 54 members – backed by China, India and other major emerging economies – called on developed countries to mobilize at least $ 650 billion a year just for adaptation to from 2030.

Separately, Fiji and other small island countries have proposed a “floor” of half that amount from 2025 – “to unlock lasting solutions,” Minister Aiyaz Sayed-Khaiyum told AFP. the island nation’s economy and climate change at COP26. .

Rich countries must recognize the urgency and insufficiency of a piecemeal solution, he said.

“You can’t build a house with one wall every decade and expect it to be shelter – we need shelter now.”

Reading weather: Christmas snow forecast for Slough, Bracknell and other towns in Berkshire