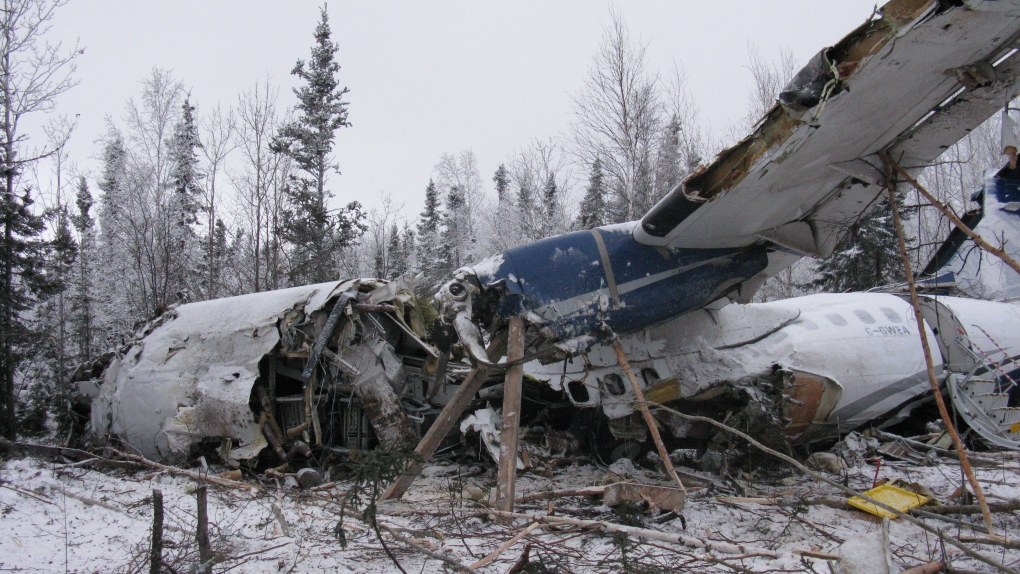 A recently released report provides insight into the terrifying moments experienced by passengers in a 2017 plane crash in northern Saskatchewan.

Twenty-five people were injured when an ATR 42-320 turboprop aircraft crashed shortly after takeoff from the Fond du Lac airstrip on December 13, 2017.

Arson Fern Jr., 19, later died in hospital from his injuries.

After waiting nearly four years, the Transportation Safety Board released the results of its investigation into the crash on Thursday.

The TSB report describes how a combination of lapses in safety procedures, poor weather conditions and underlying issues facing many northern airports in Canada contributed to the crash.

As the aircraft, operated by West Wind Aviation, initially climbed after take-off, the aircraft began to taxi due to ice buildup.

The pilot was unable to regain control and the plane crashed just 17 seconds after takeoff, the report said.

CHAOS AFTER THE CRASH

The plane’s rapid descent left passengers little time to settle down and the damage to the plane at the time of impact “compromised the restraint systems limiting the protection offered to the occupants of the plane,” said The report.

In the chaotic moments after the impact, due to their injuries, those on board struggled to take “timely post-crash survival measures.”

Everyone on the plane was injured in the crash and many passengers started calling for help using their cell phones.

A baby who was not tied “was injured by beating and crushing” in the crash, according to the report.

Current TSB rules regarding the use of child restraints had not yet come into effect at the time of the crash, according to the report.

It took the first 17 passengers 20 minutes to evacuate the downed plane. Getting those who stayed out took “a lot longer,” the report said.

A passenger was trapped in the wreckage for three hours before being released by rescuers.

Three people were in an area of ​​the aircraft where the damage was particularly severe.

Fern was the other passenger; he died 12 days later.

While the TSB pointed out aspects inherent in the design of the ATR 42-320 that made it less “impact resistant”, the sprawling 240-page report mainly focuses on how the tragedy could have been avoided in the first place.

In April 2018, the TSB previously shared its preliminary findings, saying the aircraft was not de-iced prior to take-off and ice had accumulated on the aircraft.

In their final crash report, TSB investigators set out a series of questionable decisions that date back to the start of the flight crew’s day in Saskatoon.

While the crew and dispatcher “were aware of the expected ground icing”, the decision was made to go ahead with the planned route for the day which included remote airports “which had no sufficient de-icing facilities “.

The crew first flew from Saskatoon to Prince Albert “without difficulty”.

While approaching Fond du Lac on the second leg of the crew’s journey, the aircraft encountered in-flight icing and the crew activated the aircraft’s anti-icing and de-icing systems.

Due to the limitations of both systems, residual ice began to accumulate in the aircraft.

The ice did not significantly affect the handling of the aircraft and the crew probably did not have the impression that “the residual ice was severe enough to have a significant effect on the performance of the aircraft.”

However, the flight data recorder showed that the aircraft’s drag and lift performance were degraded by 28 percent and 10 percent, respectively, according to the report.

The aircraft remained on the ground at Fond du Lac for 48 minutes with more ice or frost forming on the “critical surfaces” of the aircraft.

Once the 22 passengers are on board, the first officer inspects the aircraft.

“As the inspection equipment available was inadequate, the first officer’s ice inspection consisted only of going around the aircraft and looking at the left wing from the top of the stairs to the left rear door, without using flashlight on the dimly lit apron, says the report.

The co-pilot who was “unaware of the full extent of the ice” told the captain that there was ice in the aircraft.

“The captain did not inspect the aircraft himself and did not attempt to de-ice it; on the contrary, he and the first officer continued preparations for departure,” the report said.

The TSB report said the crew were not concerned as departures “with some surface contamination” had become common practice due to “insufficient de-icing equipment” at remote airports.

“The past success of these adaptations has resulted in the standardization of this unsafe practice and this standardization influenced the flight crew’s decision to leave,” the report said.

By the time the aircraft resumed flight toward Stony Rapids, the ice on the aircraft had increased its drag by 58% and its lift had decreased by 25%.

He quickly touched down near the runway.

As part of its investigation, pilots interviewed by the TSB regularly work inside and outside remote airports in Canada.

“The responses received to several questions showed that operations at these remote airports were regularly affected by the unavailability and inadequacy of equipment to inspect, de-ice or de-ice aircraft,” said the TSB report.

Based on its findings, which were first shared in December 2018, the TSB recommended that the Department of Transportation identify areas where there is inadequate de-icing and anti-icing equipment and “take urgent action. To make sure it is available.

During a virtual media availability, TSB President Kathy Fox said that while the primary responsibility rests with operators, passengers should not hesitate to advocate for their safety.

“There’s nothing stopping a passenger from asking the operator what actions they’re taking, you know, especially if there’s more than one operator there,” Fox said.

“They can interrogate, you know, the airport authority, they can see each other. I’m sure we’ve all been on a plane at some point when it’s snowing or there are icing conditions and we’re like ‘eh well, we have to go to the defrost bay to defrost the plane and so there are ways for passengers to find out, ”Fox said.

She also pointed out that although the TSB report identified specific safety issues related to the Fond du Lac crash, thousands of flights land and take off safely from remote airports in Canada each year.

“We believe the TSB’s final report is fair in its conclusions. We recognize the issues it identifies and accept responsibility for them,” Rise Air CEO Derek Nice said in a statement.

“We are sorry for the harm caused to the passengers and crew of this flight, their families and loved ones, and their communities, and we are determined that such a thing can never happen again. reproduce.”

“As detailed in the findings of several TSB investigations, there have been a number of past examples where Transport Canada has been slow to identify or rectify unsafe conditions at an operator,” the report said.

As an airline that “had a history of system-level and systemic non-compliance issues, the agency should have been more consistent in its approach to West Wind,” the report says.

West Wind was temporarily grounded after the accident. It was authorized to resume operations in May 2018.

As part of its December 2018 recommendations, the TSB said the Department of Transport and air operators are taking action for “the likelihood of aircraft taking off with contaminated critical surfaces.”