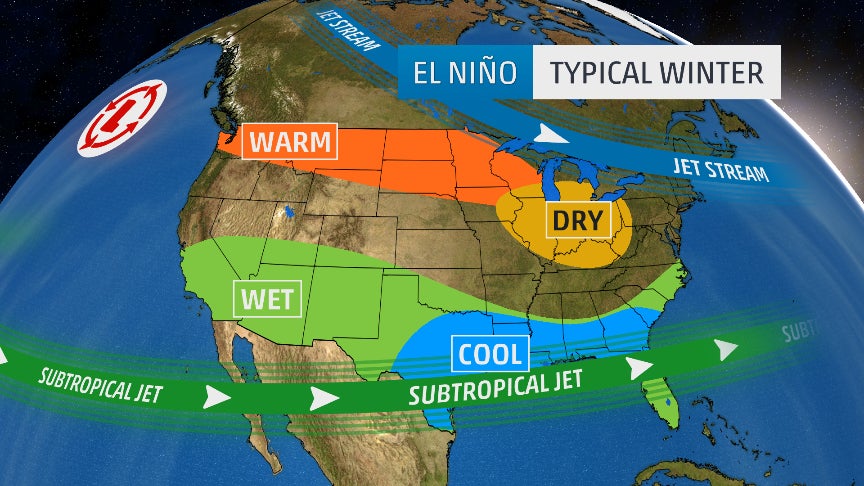 El NiÃ±o, the periodic warming of the equatorial eastern Pacific Ocean, can have a number of effects on weather around the world, from heavy rain to extreme drought, persistent warmth to stubborn cold, and inactive versus hyperactive tropical cyclone seasons.

Does El NiÃ±o also influence how snowy your winter is?

To answer that, we examined NOAA seasonal snowfall data for 51 U.S. locations for which sufficient data exists and snowfall is at least typical once a year.Â

We grouped these seasonal snowfall totals into El NiÃ±o, La NiÃ±a (its opposite, namely, a cooling of the equatorial eastern Pacific Ocean) and neutral (neither El NiÃ±o nor La NiÃ±a) seasons.

Since no two El NiÃ±os/La NiÃ±as are alike and the intensity of each mattersÂ for impacts, we further examined moderate and strong El NiÃ±o seasons, based on the categorization by Jan Null, a consulting meteorologist with Golden Gate Weather Services.Â

For most of the 51 locations, we had 23 El NiÃ±o, 20 La NiÃ±a, and 22 neutral seasons of snowfall data. One admitted drawback to this study is the rather limited sample size of strong El NiÃ±o seasons (five such cases), given NOAA’s Oceanic NiÃ±o Index dates only to 1950.Â

Finally, given El NiÃ±o/La NiÃ±a is not the sole driver of the atmosphere at any time, we thought it would be interesting to examine another atmospheric influencer during the winter months, the North Atlantic Oscillation (NAO).

Put simply, a positive NAO typically means cold air will drain from west to east across Canada, rather than plunging into the eastern U.S. Conversely, in a negative NAO, more blocking of the upper atmospheric pattern over the north Atlantic Ocean sends cold air deep into the eastern two-thirds of the nation.

We used December through March NAO values calculated by Dr. James Hurrell at the National Center for Atmospheric Research.Â

Day-to-day and week-to-week variability in the weather can still deliver a potent snowstorm in a location where a season-long El NiÃ±o would work against that. Think of El NiÃ±o, then, as just one factor loading the dice for or against a snowy/less snowy season.

With that in mind, let’s see if any patterns emerge.

While it should be noted the difference between El NiÃ±o, La NiÃ±a and neutral season snowfall may be small for several locations (scroll down for our city dataset used in this study), the general picture makes sense.

On the other end of the spectrum, La NiÃ±a favors heavier snow in the Cascades, northern Rockies, and adjacent lower elevations.

The northern Plains, Great Lakes, Ohio Valley, interior Northeast and New England tend to be snowier either in La NiÃ±a or neutral seasons.

Again, no huge surprise, here; a clear dichotomy. Namely, generally below-average snowfall in the northern tier of states and a snowier-than-average southern tier during El NiÃ±o.Â

This would appear to be due to cases where the stronger southern-branch jet stream can occasionally couple with the northern branch jet stream, cranking up winter storms whose northern reach extends in those areas.Â

The diminished snow in El NiÃ±os from the Pacific Northwest to the northern Plains, Great Lakes and New England is largely due to the polar jet stream’s diversion north into western Canada, keeping the region warmer and/or drier than average.

Digging Into the Metrics

Now, let’s lay out all the data for each of our 51 locations, organized by region.Â

As mentioned above, we also parsed out the strong El NiÃ±o seasons into those dominated by either a negative or positive NAO. As you’ll see, that made a significant impact on snowfall in some places.

Bolded data for each location highlights the snowiest seasons, on average.

Arguably, the most interesting finding here is the sharp contrast in strong El NiÃ±os depending on whether they’re dominated by a positive or negative NAO.Â

In seven of the nine cities examined, strong El NiÃ±o seasons dominated by a negative NAO produced the snowiest seasons. Four of those cities saw over a foot or more of additional snow, compared to average, in these negative NAO seasons. However, as mentioned before, there were only two such seasons in the database (1957-58 and 1965-66).Â

Conversely, with the exception of northern New England, all other cities tended to see their least snow during strong El NiÃ±o/positive NAO seasons. These seasons often featured the polar jet stream pushing cold air east across Canada, rather than plunging deep into the East. With the dominant southern jet stream unable to meet cold air or interact with the polar jet, few Northeast snowstorms would result.

Except for one recent storm.

Just days before Valentine’s Day 1983, the “Megalopolitan Snowstorm” dumped 10-30 inches of snow from West Virginia to southern New Hampshire, including the heavily-populated I-95 Northeast corridor. This happened despite one of the strongest El NiÃ±os on record and a mild season lacking in north Atlantic blocking (positive NAO).

The bottom line in most of the Northeast is to watch the degree of blocking (NAO) in a strong El NiÃ±o. Unfortunately, predicting the amount and location of North Atlantic blocking can be very difficult beyond a few weeks out.

The north-south split also shows up in the Midwest during El NiÃ±os, with lower snow totals from the Dakotas to the Great Lakes and higher totals in the central Plains. With the subtropical jet dominating in stronger El NiÃ±o winters, the far north would trend either too warm, too dry, or both.Â

Interestingly, the Central Plains saw increased snowfall in strong El NiÃ±o seasons. However, in the cases of Des Moines, Omaha and Wichita, those were heavily weighted toward strong El NiÃ±o/positive NAO seasons, which were the snowiest of all seasons for each city.

Omaha, for example, picked up about 17 more inches of snow during a strong El NiÃ±o/positive NAO dominant season than their long-term average of 27.5 inches.Â

(Note: Big Bear Lake is in the San Bernardino Mountains of Southern California. Government Camp, Oregon, is near Mt. Hood in the Cascades. The Paradise Ranger Station is in Mt. Rainier National Park, Washington.)

Other than the general snowier South, less snowy North theme, El NiÃ±o does offer some surprises in the West.

For instance, not all strong El NiÃ±os dump heavy snow in the mountains of California, as evidenced by Big Bear Lake’s paltry 6 inches of seasonal snow in 1965-66.

Flagstaff, Arizona (elevation ~ 7,000 feet) exhibits an incredible contrast in snowfall for strong El NiÃ±os, depending on the NAO, picking up over 7 feet more snow, on average, in a positive NAO-dominated season than a negative NAO season.Â

Denver and Casper, Wyoming, show similar, if not quite as large, strong El NiÃ±o/positive versus negative NAO contrasts as Flagstaff.

A UCAR/COMET study originally done in 2009 by Weather Underground meteorologist Bob HensonÂ and updated in 2015 by Matt Kelsch for nearby Boulder, Colorado, found a 20-inch-plus snowstorm, there, is about four times as likely during an El NiÃ±o than a La NiÃ±a.

In a positive NAO-dominant season, a southward dip in the polar jet stream would more often occur in parts of the West, Rockies or Plains. Add an active subtropical or southern-branch jet in a strong El NiÃ±o and just enough cold air, and you could get more lumbering upper-level lows socking the Four Corners with snow, then hammering the High Plains.

As mentioned earlier, most southern locations that pick up snow at least once each season see more of it in El NiÃ±o seasons, and many of these cities see even more snow when the El NiÃ±o is strong.Â

Particularly impressive are the spreads between positive and negative NAO seasons during strong El NiÃ±os.

Roanoke, Virginia, picks up over 20 more inches of snow, on average, when their strong El NiÃ±o is accompanied by a negative NAO. More North Atlantic jet-stream blocking means a better chance of East Coast snowstorms. This southwest Virginia city picked up over double their average snow (43.1 inches) in the 2009-2010 moderate El NiÃ±o/strongly negative NAO season.

Again, keep in mind these are just averages, which often include outliers. As investors often say, “Past performance doesn’t guarantee future returns.”

While the historical probability of a snowy or less snowy season may exist during a strong El NiÃ±o, it is just one factor at work in our complex ocean-atmosphere system. Â

Jonathan Erdman is a senior meteorologist at weather.com and has been an incurable weather geek since a tornado narrowly missed his childhood home in Wisconsin at age 7. Follow him on Twitter and Google Plus.Â

MORE ON WEATHER.COM: Deepest Snow in All 50 States