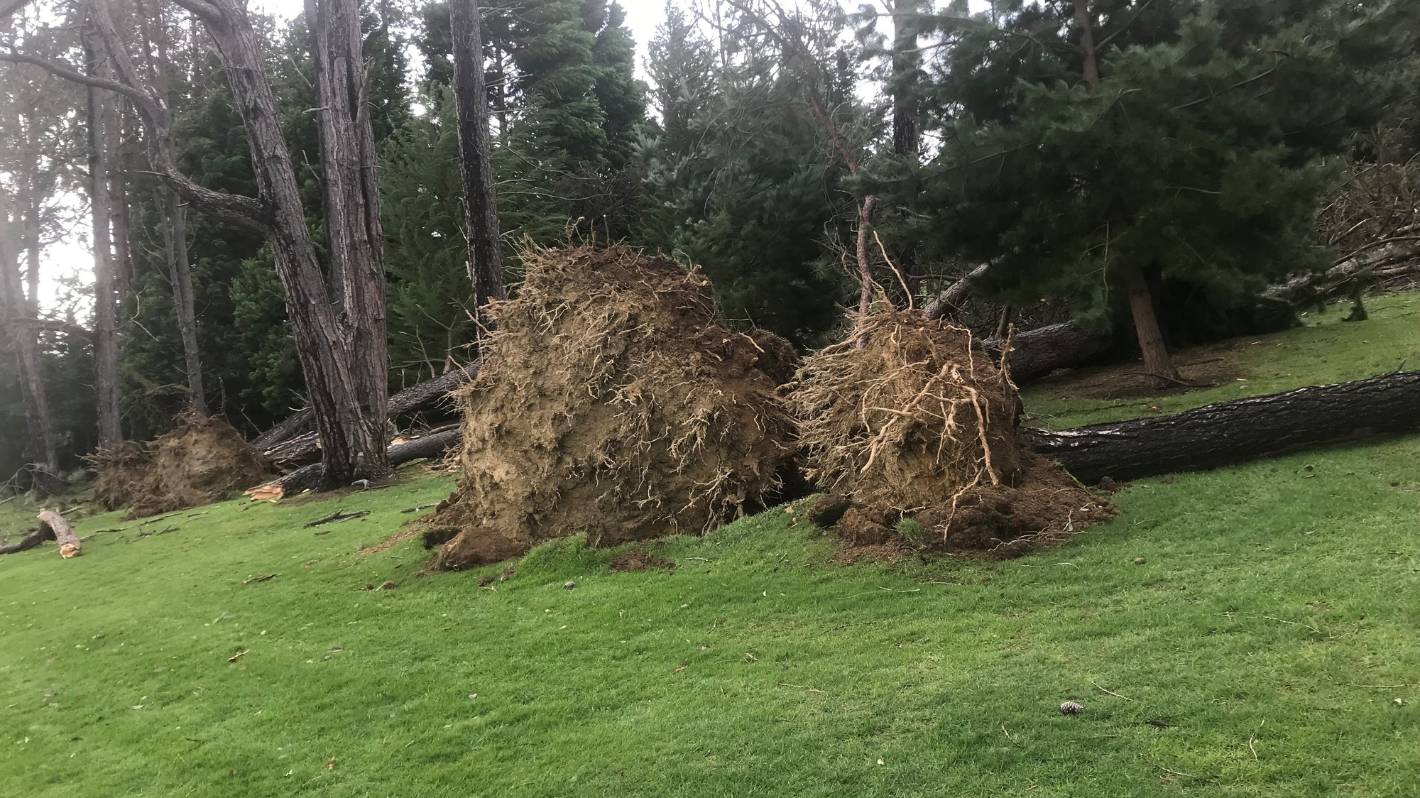 Stormy weather has hit the Deep South, with MetService warning of heavy gusts, snow and heavy rain for many parts of the country over the next few days.

Strong gales of up to 120km/h in exposed locations were forecast for the Southland Coast, Clutha Coast and Stewart Island until 5pm on Sunday.

As of 1 p.m. Sunday, gusts had eased a bit to around 100 km/h in Invercargill, MetService said. At the same time, to the northeast, at Nugget Point in southern Otago, gust strength had reached its likely peak of around 120 km/h.

Among the damage in Southland, several trees were uprooted by high winds at Queens Park Golf Club.

READ MORE:
* Thirty red-labeled houses in Marlborough including 58 in the yellow category
* Lower Hutt one step closer to the long-awaited $700 million makeover
* Things You May Not Know About Nelson Slips

“I’m not sure I’ve seen this extent of damage before…it doesn’t seem lightning at all,” club chairman David Goble said.

The damage was being assessed, with the golf club due to speak to Invercargill City Council. The council owned the land on which the fallen trees were located.

The Treble Cone ski area, near Wanaka, was closed on Sunday. He reported that “substantial” gusts at the top of the six made the operation of the chair unsafe. Cardrona was also closed and reporting high winds.

Breakdown crews had restored power throughout the day in difficult conditions.

The outages had occurred in Colac Bay, Riverton, Otatara and Bluff.

“Some of the outages were caused by trees falling into power lines, which particularly affected customers in the Otatara area,” Franklin said.

“PowerNet understands that these outages affected many customers throughout Sunday and appreciates their patience while power is safely restored.”

There had also been outages in the Otago area, including Lawrence and Beaumont.

Many shipping containers had tipped over at the southern port of Bluff, but chief executive Nigel Gear said the extent of the damage would not be known until staff entered the container terminal. No one would come in until the wind died down, he said.

Due to high winds and weather conditions at Invercargill, a total of 11 flights to and from the city have been cancelled, including services to Christchurch, Wellington and Auckland. Affected customers were reinstalled on alternative services.

Invercargill Airport’s acting general manager Grant Lilly said Air New Zealand had called for the flights to be canceled due to high winds.

Invercargill had a long runway so it was “only really a problem when there were crosswinds”, he said.

Police urged motorists between Waihola and Balclutha to be careful, due to high winds in the area. All motorists were urged to drive with extreme caution and those in high-sided vehicles or on motorcycles were asked to delay non-essential travel.

Northland’s Kaeo River Bridge on SH10 was flooded after nearly 100mm of rain on August 18. MetService warns that up to 70mm could fall in northern and eastern parts of the region on Monday.

There was also a risk of heavy snow in some central parts of the North Island overnight Monday, while heavy rain was expected in the north on Monday and Tuesday.

In central and southern areas, a cold, rainy flow from the southwest was expected to bring light snow to the south and snow as low as 600m to the lower half of the North Island. Desert Road and Napier-Taupō Road may be affected by snow.

Forecast of heavy rain for the Far North, snow in the center and in the east

On Sunday morning, MetService issued a heavy rain warning covering the period from 9 a.m. to 5 p.m. Monday for parts of Northland north and east of a line from Kaitaia to Mangawhai.

Auckland north of the Harbor Bridge, as well as the Coromandel Peninsula, were under heavy rain watch from noon to 9 p.m. Monday.

Snow could be heavy above 800m in these areas, with lighter falls possible up to 600m.

Heavy rain was expected to develop in Auckland on Monday morning and continue through Tuesday. Daytime highs are not expected to exceed 14°C in the city from Monday to Wednesday, while nighttime lows could drop to 6°C.

After being saturated with rain during the winter, Wellington was expected to have a rather dry week, with some showers. But winds from the south and southeast would cool the capital, with the temperature expected to be no higher than 8C on Tuesday, dropping to 3C by early Wednesday.

Southerly winds are expected to arrive in Christchurch on Sunday evening, bringing a cool but mostly dry week.

Temperatures in the main center of the South Island are expected to reach just 9C on Monday and Tuesday. MetService was forecasting a week of chilly mornings – down to -1C early Tuesday and -4C early Wednesday.

MetService has issued a series of roadside snowfall warnings. Affected routes include the Desert Highway and the Napier-Taupō Highway Monday night, with up to 10cm of snowfall possible Monday night.

Snow could also fall on Remutaka Hill Road overnight Monday and on the Dunedin to Waitati Highway from 10pm Sunday and drop to around 100m Monday morning.

In the Far North, southern swells were expected to develop around Cape Reinga later on Monday as the depression exiting the northern Tasman Sea moved across the northern North Island.

Southeast winds could be strong in the eastern parts of Bay of Plenty and Taupō, and in Taranaki on Monday night.