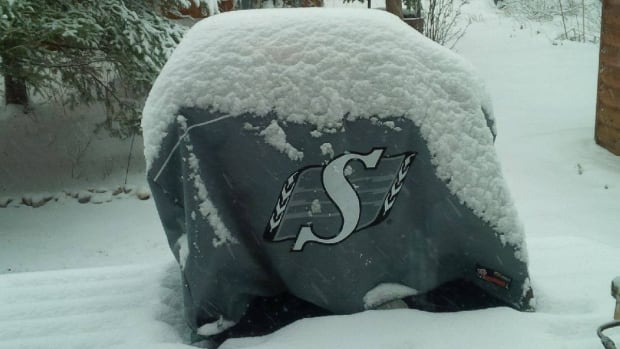 Spring snow expected in parts of Saskatchewan before May long weekend

If you’re packing the van for a trip to Saskatchewan campsites this May long weekend, consider throwing in a thermal sleeping bag.

Cold air will begin to fill the province and when it encounters a low pressure system it could produce snow.

Eric Dykes, a meteorologist with Environment and Climate Change Canada, said it was a very unusual week in Saskatchewan, with possible tornadoes on Tuesday to snow on Thursday.

“It’s kind of crazy to talk about the two extremes within days of each other, let alone a week,” Dykes said.

Prepare for the cold

Dykes said the start of the week saw warm temperatures mixed with some instability, which created perfect conditions for severe thunderstorms to break out near Moose Jaw on Tuesday evening. But the warm seasonal temperatures will not last.

Dykes said some of the models predicted rain or even wet snow during the day Thursday. The areas most likely to be affected are from Regina to the Manitoba border.

“There is likely going to be cold rain in the Humboldt area, Yorkton and Kamsack,” he said.

The cold will persist through Friday, Dykes said.

“As this precipitation shield collapses to the south, it tracks toward the southeastern part of the province from Thursday evening through Friday morning.”

Environment and Climate Change Canada predicts temperatures will drop to 1°C on Thursday night and zero on Friday. The 30-year average of nighttime lows at this time of year is 5°C.

The jet stream is a major reason Saskatchewan and Manitoba have experienced consistent Colorado lows, swells of precipitation and volatile temperatures throughout this spring, Dykes said.

“The cold air, the high pressure coming from the north is going to undermine all that precipitation and really cool the surface. That’s going to be one of the main reasons why we’re going to see this change, maybe the wetness snow,” he said.

The long weekend will not be a complete wash. Warm air will begin to return on Saturday, but predicted daytime highs are still well below average. According to data from Environment and Climate Change Canada, seasonal temperatures are expected to start to rebound in earnest early next week, after Monday’s holiday.

This cold weather will be a challenge for gardeners and growers. With overnight lows in the freezing range, some plants will need to be covered or moved back into a greenhouse to stay warm.