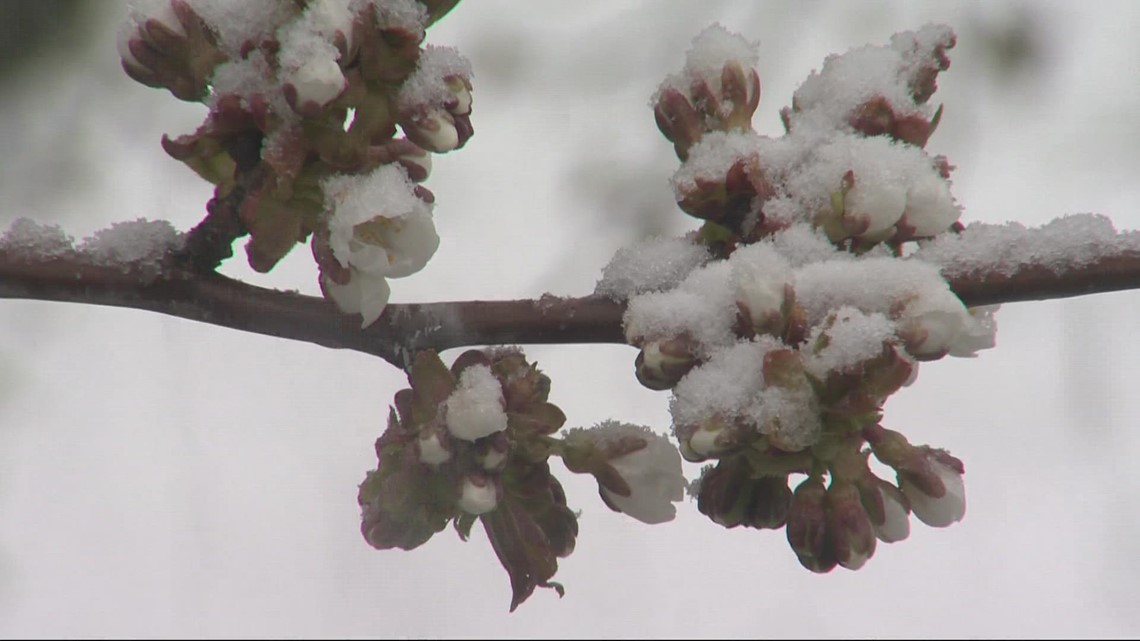 HOOD RIVER, Ore. – A week ago, Theresa Draper breathed in the balmy air as honey bees moved from flower to flower in her cherry orchard just outside Hood River. All of his fruit trees were flowering a little earlier, thanks to a late-winter warm spell. Temperatures were in the 60s and life was good.

That changed this week when a record spring storm dumped nine inches of snow in the Hood River Valley. Now Draper goes from tree to tree counting the flowers that have died and will not bear fruit.

“When I look outside, I see January,” said Draper, owner Draper Girls Country Farm at Mt. Hood Parkdale. “You just worry because we don’t usually have that time around flowering time. We never have snow.

In a typical year, Draper said they usually have a few cold nights this late in the season. She said that in these conditions, they can protect the young blossoms with special orchard fans that prevent most frosts from settling on the trees. But Draper said they couldn’t run the large fans when it was very windy, which is often the case when it snows in his area.

That’s why Draper fears losing about a quarter of his cherry crop and sustaining damage for the rest.

“Fruit could be up this year,” Draper said. “But I hope it would be better to have marked fruit than no fruit.”

To Hood River Cherry Companyworkers pay close attention to their crops, which produce about 4.5 million pounds of fruit each year.

RELATED: More snow could be coming to Portland

“The flowers and the egg will actually die when it’s around 29 degrees,” Fowler said. “And so the overnight temperatures reached around 28.5 to 29 degrees, so that’s borderline. You could have around 20% of your crops damaged.”

Fowler said despite the critical cold snap, he thinks most crops will bear fruit. He hopes things aren’t as bad as they seem.

“A lot of people go to Vegas to gamble,” Fowler said. “But the farmers, they sort of play every year.”

For Draper, every flower that survives this year is a victory, but she’s already thinking about next year. She plans to purchase propane heaters to place along the perimeter of the orchard in case of another spring snowfall.

“I never really felt like we needed them,” Draper said. “But after this year, I’m really thinking about it.”