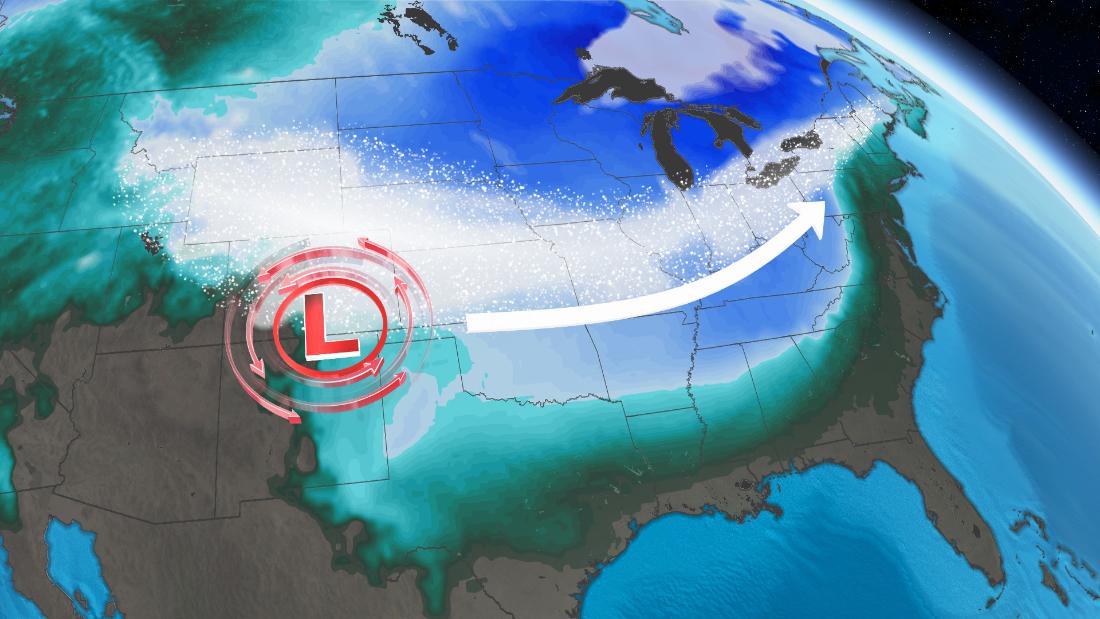 And where there’s snow, there’s cold air, with nearly 100 records for daily cold temperatures in danger of being broken.

In Saint-Louis, a dusting of an inch of snow is possible. The typical last day for measurable snow in the city is March 18, so it’s well past the usual last day for winter precipitation.

A storm system will arrive from Canada, cross the Rocky Mountains, cross the Central Plains, and terminate in the northeast. This will bring a light blanket of snow by Wednesday, which could impact travel.

There have already been reports of up to 9 inches of snow in Montana and South Dakota due to this storm.

On Monday night, the snow will begin to end in the Rocky Mountains and become more of a Central Plains event. A moderate band of snow is expected to sweep this region, affecting much of Kansas, southern Nebraska, southern Iowa and northern Missouri.

Get your detailed forecast here

By Tuesday, snow will have arrived in the Midwest, with Chicago, St. Louis and Indianapolis expected to see snow, while it continues through Tuesday morning in Missouri. This is a rapid snowfall event, lasting 3 to 6 hours in most places.

“Ground conditions will have a hard time staying below freezing, especially once the sun rises, and (temperatures) should be warm enough to start melting most of the falling snow,” said the National Weather Service (NWS) office in Kansas City.

With snow falling during the day, some places will have a hard time seeing the snow accumulate. If it’s heavy enough, however, it could build up on any surface, creating slippery travel conditions.

The snow will continue on Tuesday evening as it penetrates the eastern Great Lakes region and possibly as far south as the Ohio River Valley. Detroit and Cleveland are expected to have a buildup of snow, and Lexington, Louisville and Paducah in Kentucky could see brief, lighter snow with no buildup overnight.

By Wednesday, the snow will move inland from the northeast, with a band expected to traverse western Pennsylvania, northern New York state and northern New England. Some of these areas may start with a winter mix or rain before the colder air arrives from the north.

Total snowfall from this winter storm will typically be around 1 to 3 inches from Wyoming to Maine. Some localized areas of the central plains and northeast interior could receive snowfall in the range of 3 to 5 inches, with even higher totals in the Rocky Mountains. Denver should receive 4-6 inches until Tuesday.

Measurable snow at this time of year is starting to become scarce. Typically, the last day for measurable snow where snow is expected this week is from March to early April.

Here’s when the last snow typically arrives for some central US cities:

In Wichita, the city could end up with more than 1 inch of snow. On average, the last day of snow of this magnitude is February 20 and the record is April 8, so Wichita could receive the last one-inch snowfall on record.

Although we are late in the snowfall season, the last record snowfall in many of these areas is in May.

Temperatures will drop, allowing snow to develop, thanks to a cold front coming from the north.

Temperatures behind the front this week will bring record cold to dozens of cities. By Thursday, more than 90 record daily cold temperatures could meet or exceed.

St. Louis will probably not be until the mid-1930s with snow on Tuesday.

“This may be a bit of a shock considering that most areas will experience rather warm and pleasant conditions today before a cold front advances,” the NWS office in St. Louis said, where temperatures were expected to be in the upper 60s on Monday.

But in the central United States, it was warmer than usual earlier this year.

“In Lincoln, Nebraska, the maximum temperature forecast for Monday is only 39 degrees – that’s the high for Feb. 14,” CNN meteorologist Allison Chinchar said. “However, just two weeks ago, Lincoln hit a high temperature of 89 degrees – their average high in July. So they went from summer to spring to winter, really behind the steering wheel. where they should go, ”she added.

Widespread freezing temperatures are possible mid-week, with more than 40 million people on frost watch Monday or Tuesday evening. This can have significant impacts on some crops and damage budding fruit trees, according to the National Weather Service.

On Monday, record cold weather is expected in southern Nebraska, thanks to high temperatures only in the 1920s.

By Tuesday, this cold will move south, with cold records Possible afternoon temperatures from Texas to Michigan. Temperatures will be 20 to 30 degrees below normal across much of the central United States on Tuesday.

And it does not stop there, with additional records expected to fall on Wednesday, especially in the Great Lakes region.

Those temperatures will approach normal in the east by the coming weekend, but temperatures are expected to stay below average for at least next week.