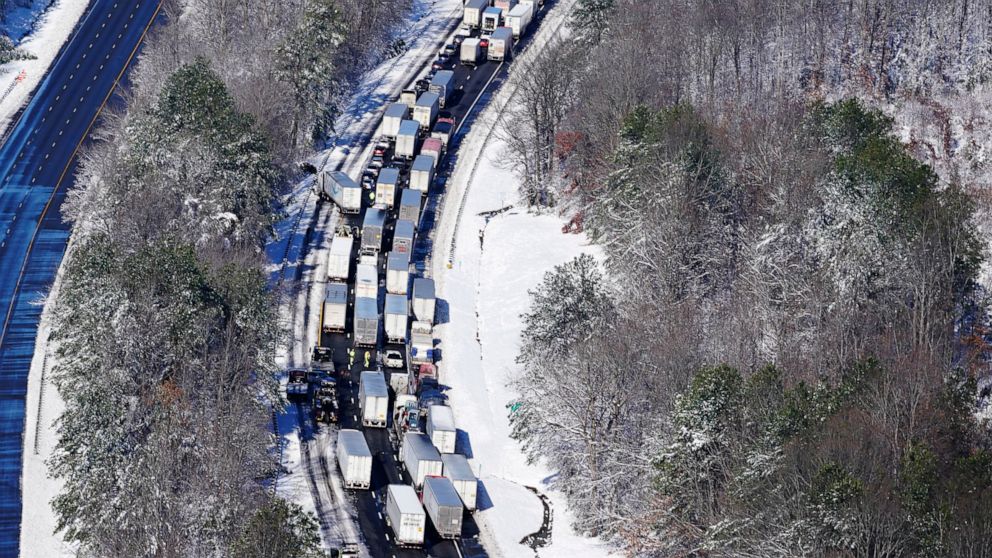 RICHMOND, Virginia — Virginia state agencies ‘collectively lost situational awareness’ and failed to deal with growing traffic congestion during a January snowstorm that stranded hundreds of motorists along of Interstate 95, according to a state-commissioned report released Friday.

While the 41-page report offers suggestions for improving future emergency response, it assigns no blame to any single person or agency. He noted that first responders were dealing with unusually heavy snowfall, busier than normal traffic and staff shortages related to COVID-19 – while dealing with a road corridor notorious for congestion in the best of times.

State officials, including leaders of the Virginia Department of Transportation, have pledged to thoroughly review the report and its recommendations.

“VDOT’s top priority is and always will be the safety of the traveling public, and as we learn from each occurrence, this report has highlighted key areas we need to refine in our winter operations,” said Virginia Highways Commissioner Stephen Brich.

No deaths or injuries were reported in the traffic jam near the nation’s capital. But the monster traffic jams have fueled outrage among motorists, some of whom found themselves stranded overnight from Monday January 3 to Tuesday January 4, pleading for help on social media.

The report included a detailed schedule. He noted that snow removal started when the snow started to pile up, but earlier rains meant the roads could not be pre-treated.

The traffic accidents began just before 4 a.m. Monday and conditions worsened for hours, with traffic bogged down in afternoon traffic jams, the report said. Snowfall then intensified, with reports of three inches per hour falling in the Fredericksburg area south of Washington, D.C. Snow plows struggled to keep up.

The traffic queue continued to pile up and by 3 a.m. that Tuesday morning, numerous groups of broken down cars and tractor-trailers were scattered along a 40-mile stretch (65 miles) of I-95 in either direction, according to the report.

With alternate routes impassable, problems piled up, and “state agencies collectively lost situational awareness and were unable to verify the extent and location of the blockages,” according to the report.

He said this was partly due to numerous technological challenges, including a traffic camera failure during widespread power outages; a power outage and resulting generator problem at a Virginia State Police communications center; serious communication problems with inoperative cell towers; and a failure of the VDOT real-time traffic information service system.

Information also poured in from social media posts, but the agencies that responded had no plan to use these “non-traditional data sources” to form an operational picture, according to the report, adding that “the information was not transmitted to the management of the agency in real time”. .”

Meanwhile, some VDOT districts experienced staffing shortages in the field due to COVID-19, and Virginia State Police had “widespread personnel issues” before the storm, according to the report.

Adding to the woes, passenger traffic was higher than normal due to recent holidays and a series of flight cancellations, according to the report. And just-in-time trucking had been on the rise since 2019, in part due to supply chain issues.

The report addressed questions frequently raised in the aftermath of the snowstorm, including why the governor at the time. Ralph Northam, a Democrat, did not activate the Virginia National Guard.

The report says state officials explored the possibility but noted, as Northam did at the time, that the Guard is not a “quick reaction force.”

The report says the Guard, even if activated, would have had little to no impact on a “situation already in progress.”

The report also addressed questions raised about why more direct assistance to stranded motorists was not provided. State officials concluded the best strategy was to stay focused on clearing the freeway, he said.

In response to the report, Republican Governor Glenn Youngkin and members of his administration targeted Northam and his office.

Youngkin said in a press release that the report showed “the leadership of the previous administration did not properly prepare or communicate.”

In a letter to Youngkin, Transportation Secretary W. Sheppard Miller III and Public Safety Secretary Robert Mosier claimed there was “almost no apparent involvement from the governor or his senior staff.”

The secretaries wrote that it appeared neither Northam nor his staff were considering an emergency declaration. Emails obtained by The Associated Press following the traffic jam showed that was not the case and questions were raised as to whether one was appropriate.

Northam’s name was mentioned only once in the report, which did not mention anyone from his office among those interviewed. The report did not explain the interview selections.

The report was produced by CNA, a nonprofit research and analysis organization that has conducted similar work for the US Navy and local, state and federal government agencies. He said he drew inspiration from documents including situation reports, real-time planning documents, news articles, social media, interviews and other sources.

The report also included a warning to motorists.

“Additionally, the public has some responsibility to stay informed of road and traffic conditions during snowstorms, and should engage in an informed decision-making process before choosing to hit the road,” did he declare.