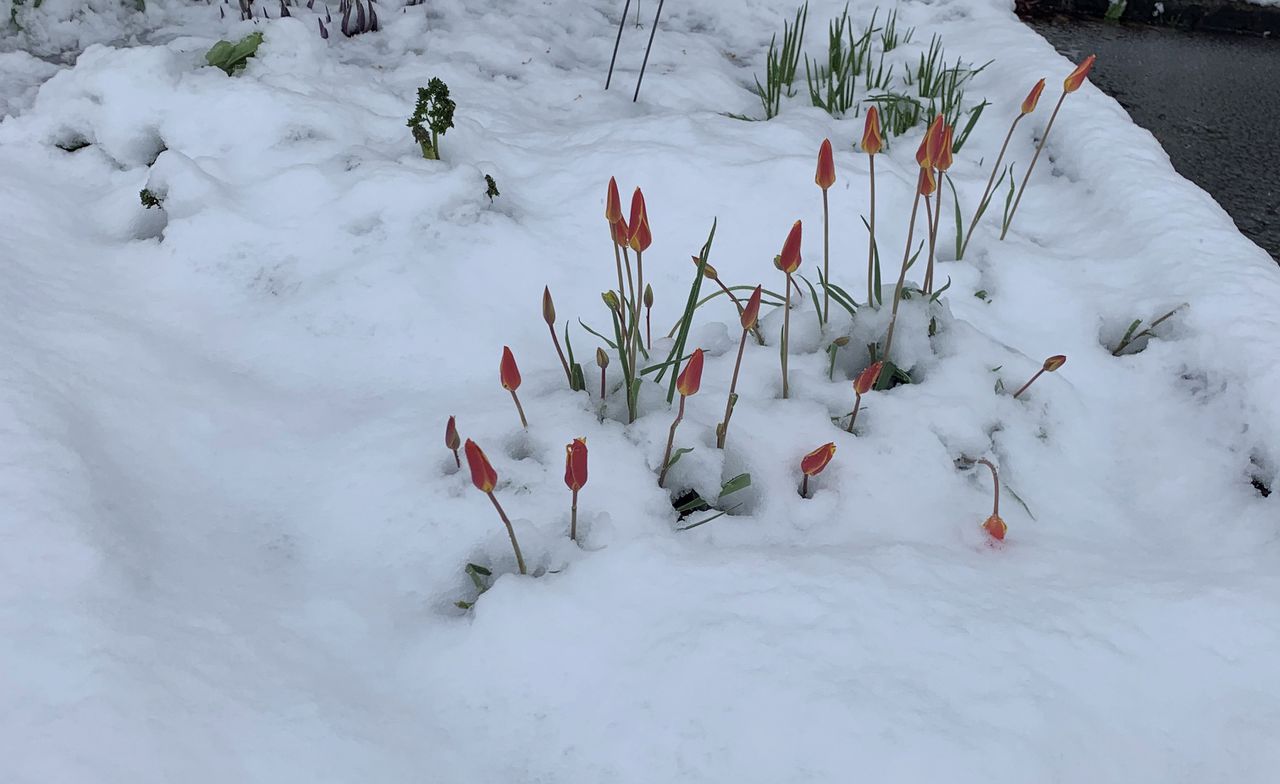 Oregon’s spring snow wreaks havoc on plants and trees. Here’s how to help them

Laura Altvater from Portland Nursery was surprised to see the damage caused by a rare spring storm when she went to work at the Southeast Stark Street nursery on Monday morning.

A crabapple tree had been uprooted by the weight of a thick layer of ice. Slush was on the ground and snow was clinging near flowers in newly delivered hanging baskets.

“Summer flowers in wintry weather?” asked the buyer of the plant, laughing, before reassuring him. “These hanging baskets will be safe and sound in a greenhouse until it warms up later this week.”

Nurserymen covered leafy vegetable plants and annuals that were out in the cold. But not all the snow has been removed.

“Fortunately, the snow is insulating, so for now we have to wait and see what damage the plants have suffered,” said Altvater, who has worked at the Portland nursery since the spring of 1998.

Monday’s storm hit just as trees were being stripped and new plantings were taking root.

The storm has left gardeners seeking advice on caring for seeds that have just started to germinate, tending to newly planted flowers and protecting blooms on fruit trees and new growth on roses. Some people are dealing with tree branches broken by snow and wind.

“Broken limbs and felled trees should be properly handled to prevent further damage,” Altvater said. “If a small plant is uprooted, it can probably go back into the ground.”

She advises worried home gardeners to be patient. It usually takes three to five days of hot weather for cold damage to be evident, she said.

Branches: Evergreen trees and shrubs and deciduous plants that have started to shed and bloom will catch more snow than dormant plants. The extra snow can weigh down the branches and potentially lead to broken limbs.

Remove snow and ice from branches as needed to reduce weight. Leave the snow at the base of the plants, as it insulates the roots.

Tying the branches up before a storm helps restructure them into a more upright position.

New shoot: Snow can have an impact on the development of leaf and fruit buds. Remove snow and cover sensitive plants.

Shelter plants: Bring cold-sensitive potted plants such as citrus and new seedlings indoors until it is warmer outside.

Leafy vegetables: Cool-season vegetables like broccoli and lettuce will likely survive and start growing again once the temperature warms up. Add soluble fertilizers such as fish emulsion after the cold weather returns.

Tomato plants: If you’ve planted warm-season vegetables like tomatoes before, monitor them in the coming weeks to see if they recover. Otherwise, be prepared to replant them when the soil temperature is 60 degrees or higher, which is usually mid-May to early June.

The Oregon Forest Department and the National Arbor Day Foundation are hoping that homeowners dealing with damaged trees don’t prune or over-rip trees that could have been saved.

A tree may be battered by a storm, but can still recover if it is fundamentally sound and has not suffered major structural damage, according to guidelines issued by the groups.

Owners should cut down the jagged remains and prune the smaller broken limbs where they join the larger ones to help a tree recover faster.

A certified arborist or a professional should be hired to remove large limbs that are broken or hanging.

Homeowners should watch for downed power lines and precarious branches that could cause injury.

If power lines are affected by a fallen tree or branch, contact your utility provider.

Homeowners are responsible for clearing wood debris from sidewalks, according to the City of Portland.

A tree maintenance company can be hired to remove debris that does not fit in a garden bin. See rates for placing additional garden waste at portland.gov/garbage-rates Where your garbage hauler.