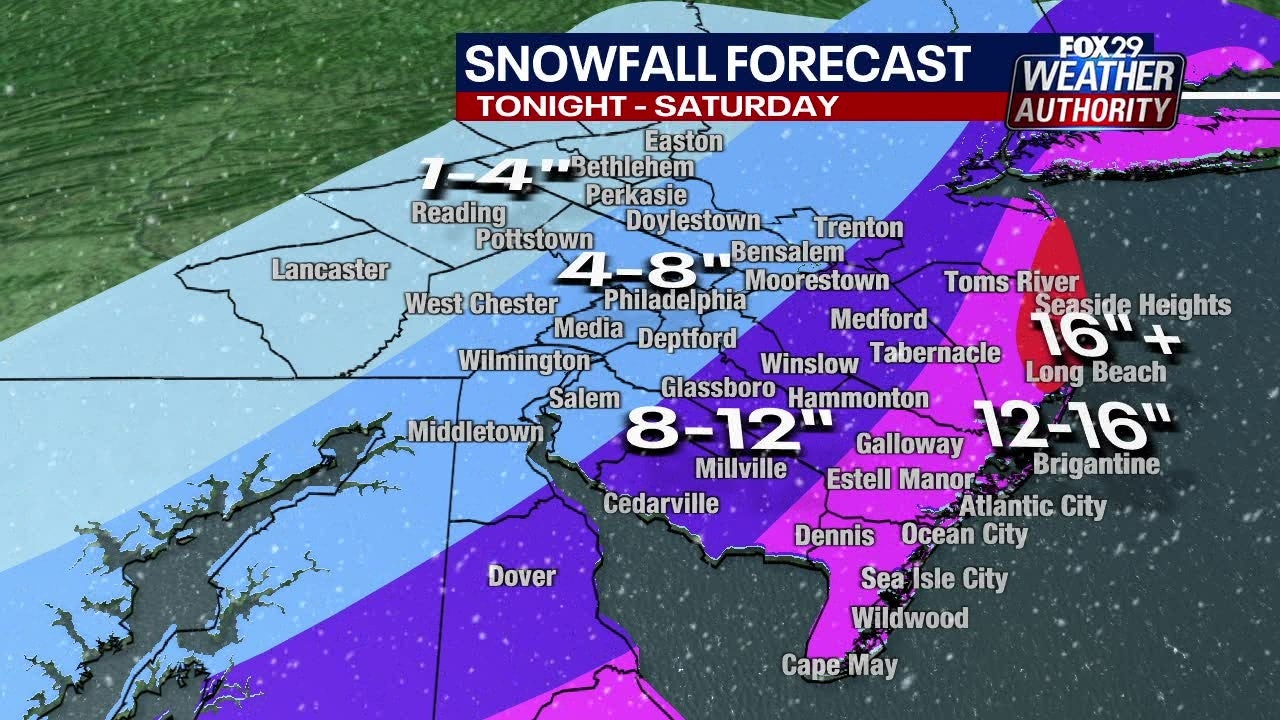 PHILADELPHIA CREAM – A mighty northeast that ripped through the Delaware Valley on Friday night continued overnight with heavy snowfall and high winds that will last most of Saturday. While most of the region will receive significant snowfall totals, forecasters believe coastal areas could see a foot or more.

The weather advisories went into effect at 7 p.m. Friday and will not expire until the snow clears Saturday evening. Areas under the blizzard warning should prepare for snowfall between 12 and 18 inches and wind gusts up to 50 miles per hour, according to the National Weather Service.

The National Weather Service warns that travel in areas subject to the blizzard warning could be “very difficult, if not impossible”, as blowing snow could reduce visibility and gusty winds could knock down tree branches. Mostly blizzard conditions are expected at or within a few miles of the coast.

New Jersey Governor Phil Murphy declared a state of emergency on Friday and asked residents to stay off the roads if possible. Similarly, Philadelphia has issued a snow emergency during which parking garages owned by the Center City PPA will offer $5 parking.

How much snow will we have?

Forecasters believe the northeast will bring the heaviest snowfall along the coast and gradually become less severe as you move inland.

The FOX 29 Weather Authority predicts coastal regions of New Jersey and southern Delaware will bear the brunt of the winter storm, with between 12 and 16 inches of snow accumulating. The sharp cutout of the Jersey Shore by Long Beach Island and Tom’s River could see over 16 inches. 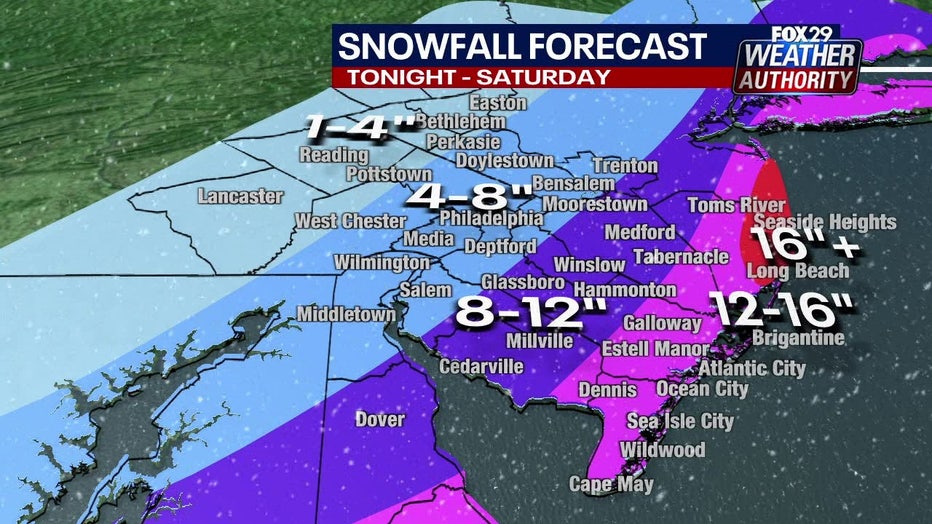 Much of interior New Jersey — including areas just south and east of the I-95 corridor and most of Delaware — should expect 8 to 12 inches of snow.

The Philadelphia area and the I-95 corridor will not see extraordinary snowfall totals, but will still receive heavy coating between 4 and 8 inches.

Areas north and west of Philadelphia are expected to see the lightest accumulations between 1 and 4 inches.

When will the snow stop?

After an appetizer of pre-Nor’easter snow showers on Friday, the winter storm rolled into parts of the Delaware Valley around dinnertime with light to moderate snowfall across most of the region.

On Friday evening, the National Weather Service pointed to a band of high-intensity snow that formed slightly further inland from the coast than forecasters had previously expected. The weather service said conditions would deteriorate rapidly in the strip as it slowly moved north overnight.

Forecasters say the snow will increase in intensity overnight, falling at a rate of 1 to 2 inches or more per hour in some places. FOX 29’s Scott Williams adds that the northeast height will be between 2 a.m. and 9 a.m. Saturday morning.

The snowstorm will continue to rage Saturday morning, with the heaviest snowfall continuing to hit coastal regions of New Jersey and Delaware. Consistent snow is expected to cover inland parts of New Jersey, Delaware and parts of southeastern Pennsylvania throughout the morning.

Threats from wind and coastal flooding

Wind chills will also be freezing, with temperatures already forecast in the 20s on Saturday. Dangerous wind chills are expected Saturday evening and Sunday morning.

Minor coastal flooding is expected Saturday morning along parts of the New Jersey and Delaware coasts. The National Weather Service says the maximum storm surge is around 1.5 to 2 feet and any flooding should be minor thanks to lucky timing.

Gale warnings were also issued in areas off the coast.

For the latest forecasts and conditions, download the FOX 29 Weather Authority app.