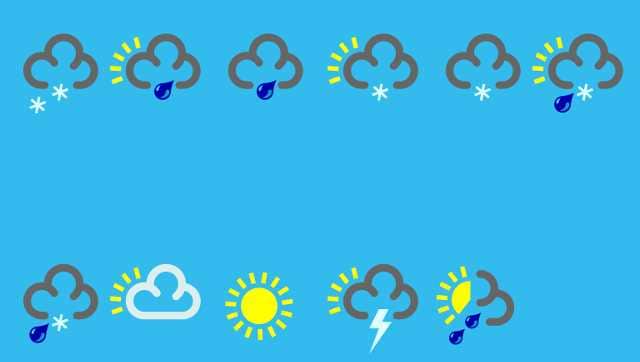 Below normal maximum temperatures are expected in the Himalayas, while they will be slightly above normal in the plains

It’s typical March weather when the sun brings warmth and the winds blow cold. In the daytime, the temperature soars and at sunset, you feel the cold.

At least two western disturbances are expected to affect the Himalayas and the northern plains of India this week. Most parts of Kashmir, Ladakh and Himachal Pradesh received moderate to heavy snowfall on Sunday and Monday. In quick succession, another round of snowfall will occur on March 9-10.

With western disturbances and southerly winds on lower levels, isolated rains and thunderstorms are expected in Punjab and Haryana on March 7 and in Rajasthan, Delhi-NCR and western Uttar Pradesh on March 7. March 9. There is a high probability of hailstorms in the region during both periods.

Below normal maximum temperatures are expected in the Himalayas, while they will be slightly above normal in the plains.

Typical summer thunderstorms are also expected in parts of Kerala, Karnataka and Goa from March 7-10.

Central and western India are in the throes of an extended spell of dry weather, but this week the tropical Bay of Bengal system will push moisture feeding southerly winds towards the central parts of the country. Higher daytime temperature in the region along with moist winds will trigger convective clouds over Maharashtra, eastern Gujarat and Madhya Pradesh.

Scattered intense thunderstorms and isolated hailstorms are expected to begin March 7-8 with peak intensity and spread through March 9. These weather activities mostly take place from the afternoon until late evening of the day.

Following last week’s trend, dry weather is expected in eastern and northeastern India over the coming week. The days should warm up with a temperature between 30°C and 35°C while the nights should be pleasant at 15-20°C.

Weather forecast by region from March 6 to 12

• Active disturbance from the west over the Himalayas from March 6 to 7.

• Moderate disturbance from the west from March 8 to 10.

• Heat and humidity feeding the southerly winds in the plains from March 7 to 10.

Weather forecast for the hills

Under the influence of active western disturbances, moderate to heavy snowfall was observed in Kashmir, Ladakh and Himachal Pradesh on March 6-7. Jammu division along with low lying regions of Himachal Pradesh like Solan, Sirmaur, Dharamshala, Una, Bilaspur, Hamirpur witnessed a period of moderate rainfall and hailstorms on March 7th. Another flurry of fresh snowfall is expected in the Himalayan region from March 8-10. Maximum temperatures will remain below normal through next week.

Under the influence of westerly disturbances and warm southerly winds which feed the humidity, scattered light to moderate rainfall was observed in Punjab and Haryana on 7 March. Similarly, another wave of thunderstorms and hailstorms could be seen in parts of eastern Rajasthan, Delhi-NCR, southern Haryana and western Uttar Pradesh on 9 March, hailstorms could damage standing rabi crops in the region.

Southerly winds are warm in nature. Daytime and nighttime temperatures are expected to increase across the plains over the coming week. Parts of southwestern Rajasthan could record around 35C. It could reach nearly 30°C in Delhi, Haryana, Punjab; and around 32-33°C in Uttar Pradesh from March 7 to 9.

Under the influence of the tropical system, light to moderate rainfall/thunderstorms occur on March 6-7 in many places along the coasts of Tamil Nadu, Pondicherry and Karaikal. Light to moderate rainfall/thunderstorms in isolated locations are very likely on the southern coast of Andhra Pradesh and Rayalaseema. Some places in Tamil Nadu around Chennai and Pondicherry could witness rainfall accumulation above 100mm during this period. Very heavy rains are very rare in March for the region.

According to IMD data, Chennai receives an average of only 3.5mm of rainfall in March. Rainfall above 100mm was last seen in 2008 when a monthly total of 137.9mm was recorded due to a similar tropical climate system. Typical heat-induced convective clouds will produce scattered moderate to intense rains and hailstorms along with lightning in Kerala, Karnataka from March 7-10. Days are expected to remain warm on the west coast with maximum temperatures between 33 and 38°C.

• East/South-East winds throughout this week.
• Feeding by moisture from southerly winds.

Under the influence of moisture supplying southerly winds and the dip of the western trough (disturbance from the west), scattered rains or thunderstorms are expected in the interior of Maharashtra, eastern Gujarat and west-central Madhya Pradesh from March 7-9.

Weather activities occur mostly from afternoon to late evening and can impact with hailstorms and strong winds. It will be a significant climate change in a long period over central and western India, and may impact the ongoing rabi harvest and fruits.

• Dry northwest winds throughout this week.

Following last week’s trend, dry weather is expected in most parts of eastern and northeastern India over the coming week. Long hours of sunshine will keep the days warm or the nights pleasant under clear sky conditions. As the temperature is expected to rise, some parts of Odisha could register it in the range of 36-38°C, while it could reach up to 35°C in other parts of eastern India. The northeastern states will have daytime temperatures mostly below 30°C.

There is no forecast for a sudden change in rainfall or severe weather over the coming week.

Spring snow goose hunting season is open until May 1 – KIWARadio.com