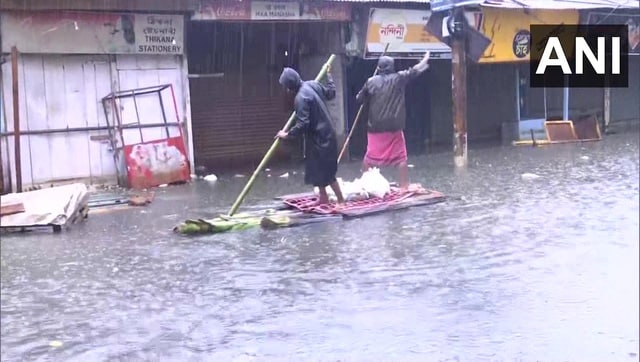 The Weather Report: Mumbai rains slowed down mid last week and picked up again from Sunday

Monsoon carnage has been going on in northeast India for a week. Extreme rains are seen in most parts of Meghalaya while heavy to very heavy rains are wreaking havoc in Assam, Sub-Himalayan West Bengal and Sikkim.

Total precipitation accumulation over the past eight days is 3,539.9 mm. The world’s wettest region is once again in the spotlight as historic rainfall is recorded. The monsoon experienced a lackluster phase earlier in the week, but once again seasonal rains are picking up on the west coast and adjacent ghats.

Under the influence of strong western disturbances, many parts of northwest India have been experiencing pre-monsoon rains and thunderstorms since June 16. Parts of Kashmir around Gulmarg saw further snowfall on June 18.

The rains brought huge drops in daytime temperatures as cloudy and intermittent rains occurred in most parts of Punjab, Haryana, Chandigarh, Delhi NCR and Rajasthan.

Maximum temperatures in some lowland stations on June 18, i.e. 7°C to 12°C below normal:

As the pre-monsoon rains kicked in, northwest India finally escaped the unprecedented heat wave that started later in March and lasted until mid-June .

According to Indian Meteorological Department, the southwest monsoon has further advanced in other parts of Gujarat region, Madhya Pradesh, remnant parts of Vidarbha, other parts of Chhattisgarh, Gangetic West Bengal, Jharkhand and Bihar on June 19, 2022.

Conditions are favorable for further monsoon advance in some other parts of Madhya Pradesh, Andhra Pradesh and North West Bay of Bengal, other parts of Chhattisgarh and Odisha, remaining parts of Gangetic West Bengal, Jharkhand and other parts of Bihar and some parts
of northeastern Uttar Pradesh over the next 2-3 days.

According to IMD data, the total seasonal monsoon rains in India from June 1 to June 19 are as follows:

Weather forecast for all India till June 25:

An active western disturbance along with moisture feeding southwesterly winds from the Arabian Sea will continue to affect northern India until 22 June.

Under the influence of the following weather systems, pre-monsoon rains are expected to continue in Punjab, Haryana, Delhi NCR, Rajasthan and parts of Uttar Pradesh. Intermittent rains will keep the temperature in check until then and the maximum temperature is expected to remain below normal by 5° to 13°C.

The influence of western disturbances will weaken by June 22 and again temperatures will rise sharply from June 23 to 25. This time the weather will be more sultry as the humidity is higher. Monsoon progress towards northern India is not expected until June 25th.

The onset of monsoon is declared in most parts of Maharashtra, southern Madhya Pradesh and central Chhattisgarh.

Over the coming week, scattered moderate to heavy rains are expected in interior Maharashtra, Chhattisgarh and eastern Madhya Pradesh.

Meanwhile, with the strengthening of the offshore trough and the west monsoon rains, they are expected to pick up in Konkan and Mumbai. Typical heavy monsoon rains will impact the financial capital over the coming week starting Monday. Waterlogging is very likely in low lying areas rains will be uninterrupted at certain times of the day.

Pre-monsoon rains are expected in various parts of western Madhya Pradesh from June 20 to 23, but the onset of the monsoon is not expected until June 25.

Monsoon progress in Gujarat will be slow especially for Saurashtra where no major rains are expected in the coming week.

Flood-causing rains in northeastern India are expected to ease a bit over the coming week, but the thrust of southerly winds from the Bay of Bengal will continue, hence moderate to heavy rains will continue in most parts of Meghalaya, sub-Himalayas. West Bengal, Sikkim and Assam with isolated very heavy rains.

The rains will gradually increase over parts of Odisha, but other parts of Jharkhand, West Bengal and Bihar may not experience an active monsoon except for a few scattered thunderstorms until June 25.

Westerly winds are strengthening, as is the offshore trough on the west coast of India. The first proper monsoon wave of the season to impact India’s west coast and Ghat sections will be June 20-25.

Most parts of Kerala, Karnataka, Goa coast and ghat sections will experience heavy to very heavy rains over the coming week and active monsoon conditions will prevail in the region. As the offshore trough activates, the rains will start to decrease in the interiors i.e. Tamil Nadu and interiors of Karnataka including Bangalore this week.

While normal monsoon conditions will prevail in Andhra Pradesh and Telangana including Hyderabad, mostly moderate rains are expected throughout the next week.