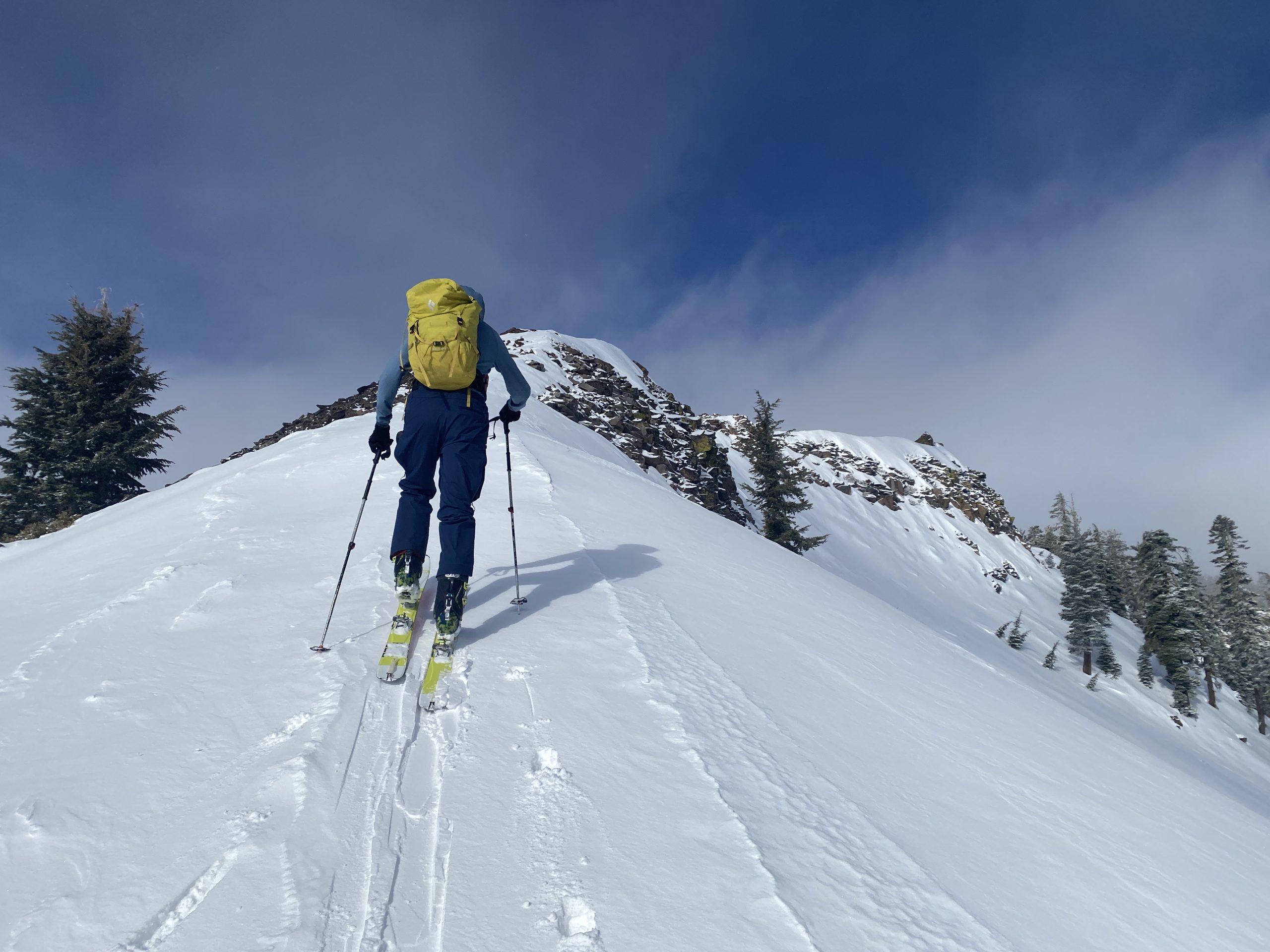 This weekend we ventured up to Mount Lassen in Northern California to see if we could find any good snow – even though it’s been over two months since the last big snowfall.

We left Red Bluff around 6:45am on Saturday morning and drove about an hour to the Kohm Yah-mah-nee visitor center at the southwest entrance to the park. We drove along the snowy park road to the busy skin trail near the Sulfur Works hot springs. We followed the hide trail down West Sulfur Creek to the Ridge Lakes Basin to research options in the area.

Mount Diller, which skied amazingly well a few weeks ago, looked appealing, but we were concerned that the morning sun had already overcooked the corn past its peak. Instead, we opted to ski a delightful east face of an unnamed peak to the southwest of the lake.

We skinned to the saddle above the lake and climbed the ridge to the summit. We ripped the skins off and moved on to the descent, hoping to score perfectly ripe corn on the descent. Unfortunately the wind had been blowing all morning and seemed to have kept the snow almost frozen. The surface was a bit forgiving, but for the most part quite firm and talkative.

We decided to head south to look for better snow on the southeast facing slopes closer to Brokeoff Peak. Once we reached the ridge above these inclines the wind was blowing over 60 mph and nearly blew us off the ridge. We made the transition and started our descent on the sunny slopes below. Again the wind kept the summit quite cold and frozen but once we got down and the winds died down the corn was very consistent and nice to ski.

We climbed back up the ridge and tried southeast facing trees in the bowl immediately north of the one we had just skied. The trees sheltered the snow from the wind, so the snow was soft and forgiving – perfect for spring turns! At the bottom the snow got a bit heavy and mashed but 90% of the descent had incredible snow. At the bottom we thought we’d try some north facing trees in the same bowl, hoping the shade would keep us some good snow. We put our skins back on and hiked back up to the ridge, where we then dropped into the shady forest in hopes of getting some good snow. The snow was quite soft and cold so we went back up for a second lap. On the second lap, we came back down to the road, where we skied back to the car. The snow in the shade was still a little deep, but overall pretty nice.

Overnight, Lassen scooped up 3-4 inches of fresh snow. Looking at the forecast and seeing very little sun during the day, we chose purely north and east objectives, hoping that the new snow would cover the ugliness of the previous layer. Fortunately, he did! With the help of a wind haul there was a good 4-6″ in most spots.

We skied 4 north and east facing bowls in an area close to Brokeoff. The conditions were best described as “dust over crust”, but the skiing was excellent nonetheless!