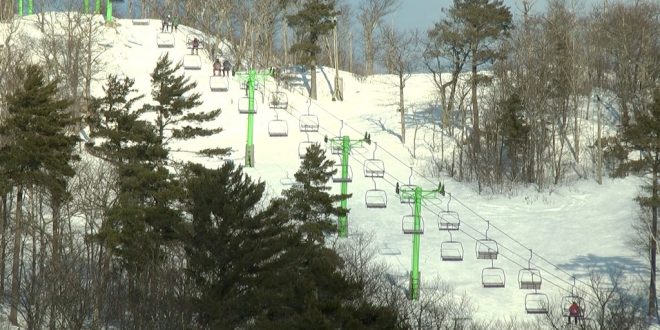 It’s an honor that never becomes an old hat. Mount Bohemia was named by USA Today’s 10Best ranking system as one of the best ski resorts in the country. The experience of descending into the woods is certainly exceptional for the Upper Midwest, but President Lonie Glieberman says the recognition helps diversify visitors to the hill beyond Michigan, Wisconsin and Minnesota.

Mount Bohemia has expanded rapidly over the past 10 years or so. Originally opened in 2000, it was once known for its rustic nature. Today it features new trails on the east face, snowshoe trails totaling over 11 miles, and a Nordic spa. Glieberman says the concept is hugely popular in Europe and Canada, but few American beach resorts have one.

Mount Bohemia hopes to open by the end of the month, with the spa this weekend. Glieberman is aiming for the week between Christmas and New Years, but that depends on the weather.

The full press release is below.

Once again, Mount Bohemia has been recognized by USA Today’s 10Best Readers’ Choice Awards as one of the nation’s top downhill skiing destinations. A panel of experts partnered with 10Best editors to select the initial nominees, and the top 10 winners were determined by popular vote. This marks the fourth consecutive year Mount Bohemia made the Top 5 from today’s popular Top 10 list.

“It is a great honor to have been chosen as the fourth best ski resort in North America,” said Lonie Glieberman, President of Mount Bohemia. “We believe that what makes Mount Bohemia so special is our commitment to creating a unique atmosphere. It is important for us to stay true to our roots; the Bohemian lifestyle is all about fun, adventure and the wilderness. We strive to bring this to our guests every day with ungroomed trails, fresh lake-like powder snow and an après ski scene with a party touch at the Nordic Spa.

Mount Bohemia, best known as a destination for extreme skiers and 273 inches of average annual snowfall, is the only resort in the Midwest to make the top ten. Stowe Mountain Resort in Vermont was the only other resort east of the Mississippi River to make the list. For the full list of selected resorts visit https://www.10best.com/awards/travel/best-ski-resort/

Report: Asylum seekers resort to illegal crossings after being unable to lodge claims at ports of entry

Snow forecast is running out of steam, reducing chance of snowfall on Friday