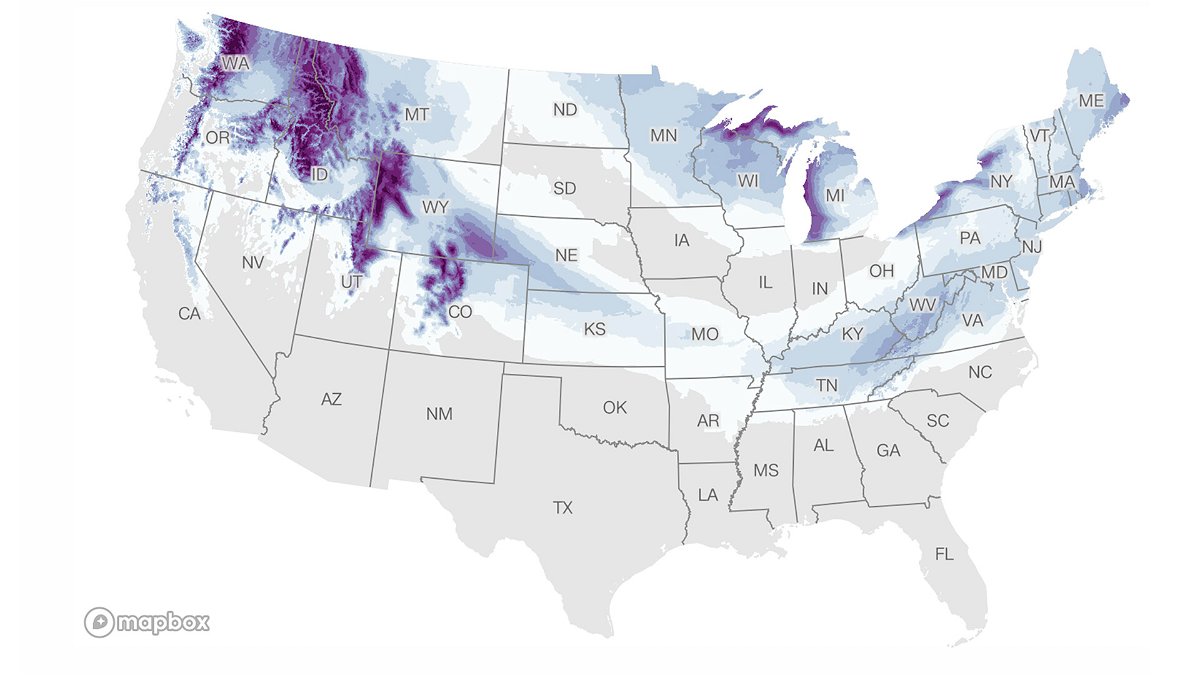 A triple whammy of sleet, snow and ice brings misery to millions of people across the United States – with many stuck in the massive winter storm without power.

The storm has already produced 2 feet of snow in parts of the Rockies and between 12 and 15 inches of snow in several Midwestern states. Thursday afternoon saw snow falling from the southwest to New England, with additional snow expected on Friday.

Meanwhile, an ice storm creates dangerous conditions from Arkansas to Ohio. More than half an inch of ice accumulation could bring down trees and power lines, threatening access to electricity for large areas.

Many are already suffering from this consequence. By 2 p.m. ET, there were at least 263,000 customers without power across a wide swath of the United States, according to Poweroutage.us.

The “significant winter storm is expected to affect much of the central and northeastern United States through Friday evening,” the National Weather Service‘s weather prediction center said.

More than 20 inches of snow had already accumulated in the Colorado Springs area, the weather service said. Parts of Illinois and Indiana are buried under a foot of snow.

In Texas, the storm will test the state’s power grid, which suffered catastrophic outages last February. The state said 246 people died – most of hypothermia – after a snow and ice storm left thousands of Texans without power for weeks.

Leaders of the state’s power grid — Electric Reliability Council of Texas, or ERCOT — said Wednesday they believe they are prepared to handle high demands during the storm, but also warned there could be local outages. due to ice on wires or fallen tree branches.

Gov. Greg Abbott said in a briefing Thursday that the state’s power grid has “a lot of power available right now,” calling the weather “one of the most significant icing events we’ve seen.” have had in the state of Texas for at least several years”. decades.”

“The power grid is working very well right now,” he said. “At projected peak demand, there should be about 10,000 megawatts of additional electrical capacity. To put that into context, that’s about enough additional energy to power about 2 million homes.

For Texans who have already lost power — about 47,000 were without it Thursday afternoon — Abbott said the most likely cause was high winds affecting lines or freezing conditions.

More than 10,000 linemen are already working to fix power lines that aren’t working, the governor said, with another 2,000 linemen coming in from other states.

Tornado concerns in the South

Rain was falling in the South, where there were flood warnings or watches in parts of Alabama, Georgia, Mississippi, South Carolina and Tennessee.

There were also tornado watches in 24 counties in Alabama and 17 in Mississippi.

According to the Storm Prediction Center, a few tornadoes, a few of which could be intense, and damaging storm wind gusts up to 70 mph are possible.

The watch includes 3 million people, including residents of Gulfport, Mississippi, and the cities of Mobile, Birmingham, and Tuscaloosa, Alabama.

As the storm system pushes further east, forecasters say, it will offer a chilling mix of hazards.

“The system will be extended with multiple winter weather cycles through Friday for parts of the central United States before moving inland from the northeast,” the weather service said Wednesday.

The journey is already miserable

In Springfield, a train hit a car that got stuck on the tracks due to snow on Wednesday night. The driver – the only person in the car – was able to get out in time, Springfield police said. No injuries were reported.

Amtrak canceled several train routes Thursday to and from Chicago, including Cardinal Train 51 to New York. The route between St. Louis and Kansas City is also canceled, Amtrak said.

In Oklahoma, travel to most areas of the state “is strongly discouraged,” the state Department of Transportation said in a news release. Only two counties in the state were unaffected Thursday morning, and portions of several freeways, including I-40 and I-35, were closed.

The Missouri Department of Transportation also warned drivers that many roads across the state were covered in snow.

“Conditions remain hazardous…Roads across the district are still covered with more snow expected in the morning,” the MoDOT Central District said. tweeted.

The gigantic storm also hampered air travel on Thursday, which is expected to be one of the 10 worst days for air travel in the past year.

Dallas-Fort Worth International Airport closed early Thursday due to ice and snow, the Federal Aviation Authority said. It reopened a few hours later.

Correction: A previous version of this story exaggerated the new February 2 snowfall record for Oklahoma City. The new record is 3 inches.