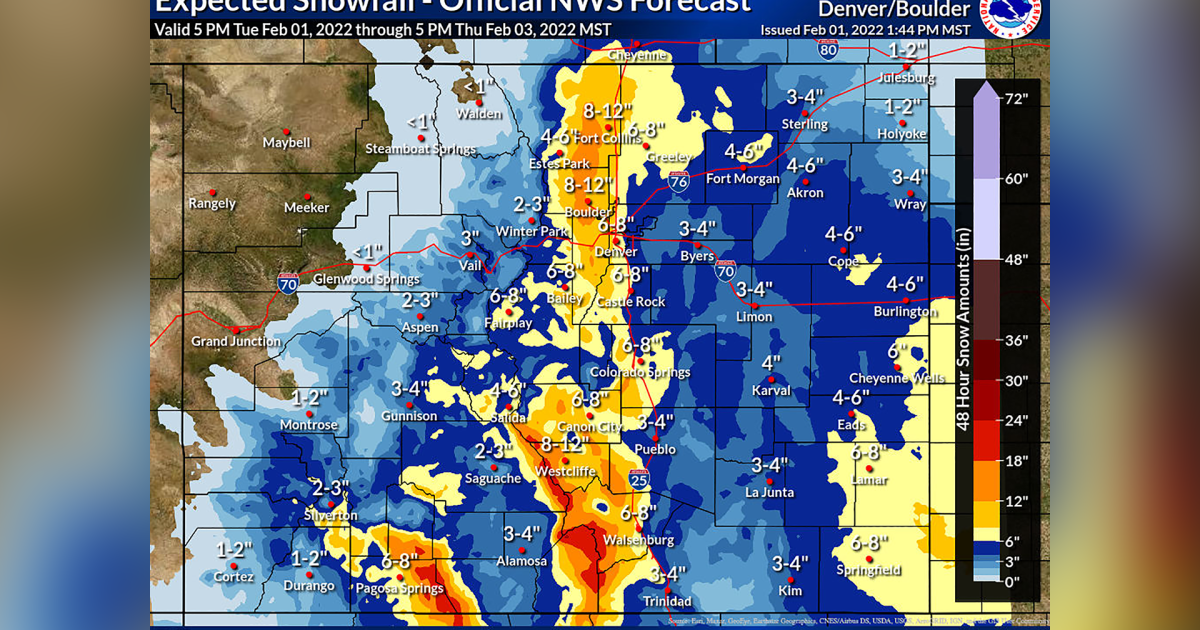 UPDATE (Wednesday, 6:57 a.m.): A heavy band of snow fell across parts of the Denver metro area overnight, dumping more than 7 inches in some areas, and snow is expected to continue into the afternoon before freezing temperatures set in . We have a new story with the latest on what to expect all day Wednesday. Click here to find out more.

DENVER — The National Weather Service upgraded the Denver metro to winter storm warnings early Wednesday due to a band of snow across the metro area. The NWS says an additional 6 inches of snow could fall below the strip.

The Front Range foothills had already moved to winter storm warnings and the plains to winter weather advisories ahead of the snowstorm, which hit Tuesday afternoon and will continue to dump snow well into late Wednesday.

The latest forecast calls for around 4 to 8 inches of snow in Denver and around 7 to 14 inches for the foothills. As this will be an upslope snow event, the highest snow totals are expected to be seen in the foothills west of Denver and north of Wyoming, according to the NWS in Boulder.

Snow falls on the state. Here’s what you can expect for your morning commute

Snow shouldn’t be as heavy east of I-25, with 6 to 8 inches expected at Castle Rock, 3 to 4 inches at Denver International Airport and about 6 to 8 inches at Greeley, according to latest NWS forecast.

The NWS in Boulder said in its discussion of the updated forecast just before 3 p.m. Tuesday that there could be heavier bands developing Tuesday evening with snowfall rates of half an inch to one. inch per hour.

The NWS is also monitoring whether or not conditions will develop to force some of the heaviest snow resulting from upslope conditions further east toward the Denver area.

“At this time we still think the upslope component will generally win out as there is some forcing aloft as well, but we have increased our quantities a few more inches from the base of the foothills to the east. to approximately I-25,” NWS forecasters said in the update. “…Current warnings and advisories will remain unchanged at this time, but be sure to note that this forecast is far from certain.”

2/1: Snow cover increases this afternoon and will continue into tomorrow night. This will affect the evening (today) and morning journeys tomorrow. #COwx pic.twitter.com/0HR19K4ppK

Winter storm warnings are in effect from 2 p.m. Tuesday through Wednesday for the foothills of Clear Creek, Gilpin, Jefferson, Douglas, Larimer and Boulder counties, which are expected to receive 7 to 14 inches of snow.

Winter storm warnings for lower elevations in those counties, including Fort Collins, the city of Boulder and the western suburbs of Denver, went into effect at 5 p.m. Tuesday and continued through Wednesday, with 7 a.m. to 11 a.m. inches of snow expected.

Snow will start on the mountains and foothills and spread into the I-25 corridor. NWS Boulder forecasters wrote Tuesday morning that snow is expected to start “just in time for the evening commute” in the Denver metro area. Updrafts are expected to push snow totals closer to the foothills and west of Denver.

As always, feedback is appreciated! pic.twitter.com/k9NIVNGiHp

The Eastern Plains are subject to a winter weather advisory of 3 to 6 inches and winds of up to 25 miles per hour from 8 p.m. Tuesday through Wednesday.

In addition to snow, the storm will bring extremely cold temperatures. Highs on Wednesday are expected to be only in the low single digits in the lowlands and in the high country, with wind chills in the single digits and below zero.

Once the snow and clouds dissipate Wednesday evening through Thursday morning, low temperatures are expected to drop below single-digit freezing and teens across much of northeastern Colorado.

The South Platte and Arkansas river basins are expected to see increased snow accumulation levels from this storm, as southern Colorado is also expected to see heavy snowfall, with up to 18 inches in the mountains west of Colorado Springs, Pueblo and Trinidad.

The Arkansas Basin and the Upper Rio Grande Basin were the only two in Colorado to be below median snowfall levels to start Tuesday. Statewide snowfall was 102 percent of the median.

All of Colorado remains under some sort of drought as of this week, and 65% of the state is experiencing severe drought or worse conditions.

The Denver metro area and parts of the Eastern Plains are experiencing extreme drought, as is far northwest Colorado and about half of the state’s southernmost counties.

You can always watch weather, speed cameras and news 24/7 on the free Denver7+ app on your TV.