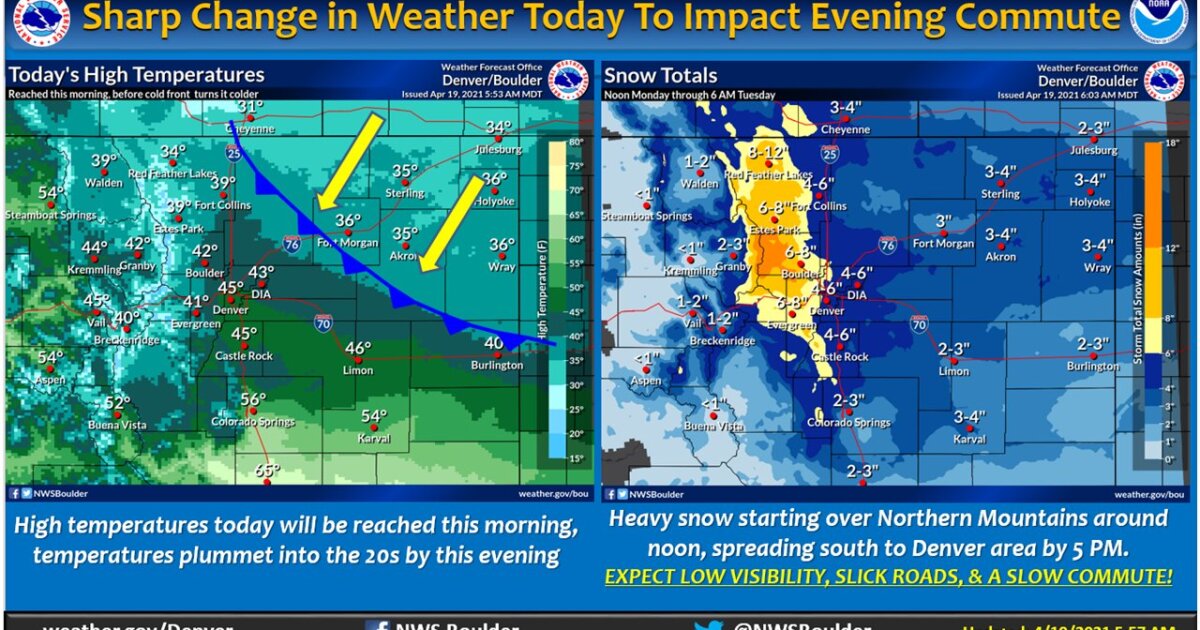 Here’s what to expect across Denver

DENVER – More spring snow is on its way to Denver and the rest of Colorado’s Front Range. And like last week’s storm, we were able to see several decent snow totals in the metro area.

Here’s what to expect, and when, via the National Weather Service in Boulder and our Denver meteorologists7:

A cold front moved across the area on Monday morning. And while temperatures could climb into the 40s on Monday afternoon, they will only get cooler as the day progresses, with a second front bringing temperatures down into the 20s in the evening. Most of the Front Range, including Denver, was subject to a winter weather warning Monday, and some areas of the foothills were under winter storm warning.

Heavy snowfall is expected to start falling over the northern mountains by Monday afternoon, with snow spreading southward into the Denver metro area around 5 p.m., possibly earlier. This will make the commute slow due to low visibility and slippery roads.

Snowfall rates could be around an inch per hour, along with gusty winds, according to the National Weather Service. The heaviest snow is expected to fall between 6 p.m. and 9 p.m. and then decrease after midnight.

How much will we have?

This is a loaded question. But forecast models – until there – show heavy snowfall, with 4-6 inches expected in Denver and along the Interstate 25 corridor. Snow amounts are expected to be higher in the northern foothills and mountains, in the Estes Park area, with 6 to 8 inches expected throughout this region.

It will be a relatively quick storm, around 12 hours from start to finish, according to the National Weather Service. But with 4-6 inches of snow falling in this time frame – and higher amounts west of Denver – expect heavy snowfall throughout the evening.

As of Monday morning, the NWS was projecting about an inch of water in the snowfall for the mountains and foothills, with a half to 8/10 inch of water for the Denver area.

Here are the latest snowfall projections, via the NWS:

Snow is expected to clear from the area by Tuesday morning, although temperatures are in the 20’s and teens in northern Colorado. We could see light showers throughout the week, but the weather is expected to dry out and warm up for the weekend.