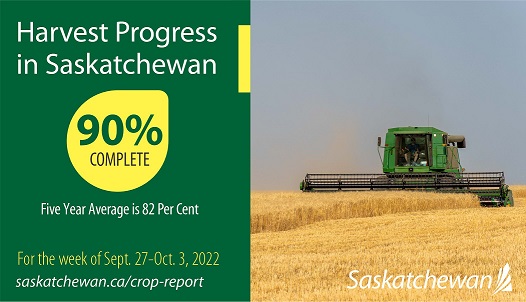 Harvest report for the period from September 27 to October 3, 2022

THE MINISTER OF AGRICULTURE
SUBMITTED

The weather last week was excellent for the harvest. The province now has 90% of the crop in the bin, up from 81% last week and well ahead of the five-year average of 82%. Some growers struggled with heavy fog and dew in the morning, which delayed their harvesting activities until the afternoon, resulting in short days and less progress. High humidity in many parts of the Southeast, Mideast and Northeast makes it difficult to combine and has also led to grains breaking off at higher than normal humidity levels. Producers need to dry the grain in order to store it properly.

Harvesting in the southwest and mid-west regions is nearly complete and most flax is awaiting harvest, which will likely occur after the next severe killing frost. The northwest has 94 percent of their harvest, the northeast 87 percent, the southeast 86 percent and the central east 81 percent.

Again, there was very little rain last week, with only trace amounts recorded for most areas. Parts of the southwest received two to three mm, but this did little to improve soil moisture conditions. All areas of the province report being either extremely dry or getting drier each week. This includes the southeastern and central eastern regions, which started the season with an abundance of moisture.

The majority of crop damage this week was due to wind, waterfowl and wildlife. Wind continues to impact unharvested crops by blowing swaths around, as well as husking crops and causing lodging.

Producers are busy harvesting, hauling grain and bales, and moving livestock. Some growers also begin other fall field work, such as post-harvest weeding and harrowing. Winter cereals cannot be sown in many areas due to lack of soil moisture. Fall fertilizer applications are also not possible in many areas due to these dry conditions.

Another week of good weather brought great progress across the region; many other producers have completed their harvesting operations while others are about to be. Producers in the region have 87% of the harvest in the bin, well above the five-year average of 75% for this time of year. Growers were very worried about a potentially long harvest, but luckily the weather cooperated and they were able to harvest large quantities of their crop without suffering major losses from frost or early snowfall.

Yield estimates in the region appear to be very good and many growers are extremely happy with what they are seeing coming into their bins. Hard red spring wheat yields 55 bushels/acre, oats 113 bushels/acre, barley 81 bushels/acre, flax 30 bushels/acre and canola 42 bushels/acre. Some growers have of course seen lower yields due to drier conditions or complications earlier in the growing season.

Due to some rainfall in late August and early September, the region is experiencing a lower amount of 1CW graded spring wheat. Quality ratings for hard red spring wheat are 67% 1CW, 30% 2CW and 3% 3CW.

The majority of crop damage this week was due to wind blowing around windrows, waterfowl and wildlife. Farmers are busy combining, harrowing, weeding, baling and carrying bales.

Growers in this region took advantage of the good weather last week and got 94% of the crop in the bin, well above the five-year average of 60%. This region has experienced difficult harvesting conditions over the past few years with too much rain or even snow causing multiple problems. It is encouraging to see that growers were able to wrap up the harvest without too many major weather-related issues. Conditions are extremely dry and growers would like to see rain soon and for it to continue raining for several days.

The majority of crop damage this week was due to wind, wildlife and waterfowl. The wind blew everywhere but also helped dry out some of the crop in the field.