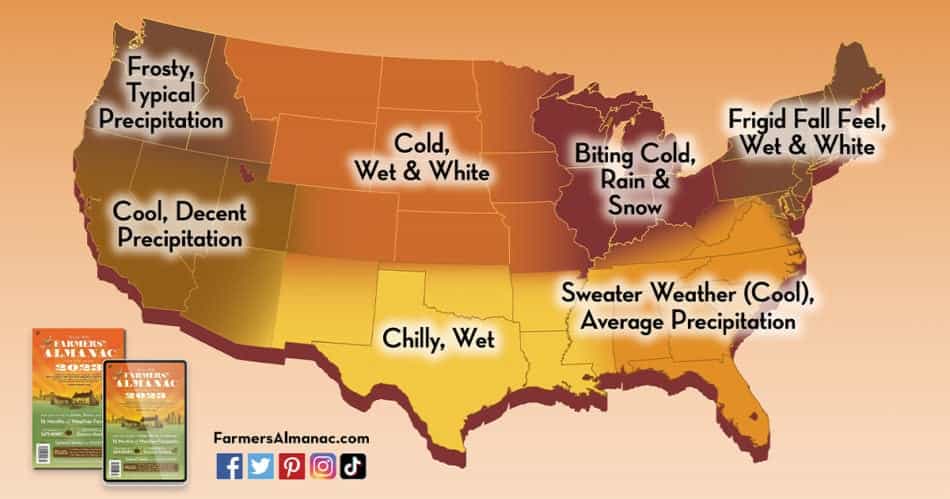 The Farmers’ Alamanc published its much-anticipated forecast for winter 2022/23 last week, warning of a winter of extremes. But before winter comes, we have to wait for summer to turn into autumn, and sometimes autumn can bring us snowy treats. Last year, a huge snowstorm dumped feet of snow on California in October, allowing Palisades Tahoe and Mammoth Mountain to open before November.

So what is this what does autumn look like, and when and where will it snow for the first time? Here’s what the Farmers’ Almanac says:

Will we see snowfall in the fall?

Despite the summer heat, the Farmers’ Almanac Extended Fall Forecast predicts below normal temperatures across the country. The cold will really start to set in during the second half of November and will continue throughout the year. Freezing temperatures will become common across much of the West in time for Christmas.

Scary movies, costumes, and things that go bump in the night won’t be the only spooky things this Halloween! Unusually early snowfall could hit the northern Rockies and Plains in late October!

Above normal precipitation is forecast for a wide swath of the central part of the country, including the Great Lakes, the Ohio Valley and the Midwest as well as the Rockies and the Great Plains.

Many places will see their first snowflakes in November and there will be more than a few significant snowfalls before winter officially begins in late December. This will be especially true in the Rocky Mountain and Plains states, where heavy snowfall is possible right after the Thanksgiving holiday. If all goes well, most places could see generally good Thanksgiving weather, although Christmas could be disrupted by rain or snow depending on your local temperatures.

There’s an old adage in New England, for example, that October usually has 19 fair days. That might normally be true, but 2022 will be the exception – not the rule – with quite a few cloudy, windy and rainy days. This will set the stage for November, which will be just an extension of October’s unstable weather pattern, except it will turn colder with some snowflakes expected.