Korean-language social media posts repeatedly shared the false claim that frost was detected on South Korea’s highest peak, Mount Halla, in August 2022, citing a tweet from the Meteorological Administration Korean (KMA). However, the KMA tweet shared in the posts was actually posted in October 2021. A KMA spokesperson told AFP that the weather agency had not recently detected frost on Mount Halla. and that the region had been hit by heavy rains in August 2022.

The tweet reads: “Cooling of the ground overnight has caused temperatures to drop to around 0 degrees Celsius, and in some areas the first frosts and ice of the year have been detected.

“This morning rime frost was found on Mount Halla. Rimestone refers to ‘frost deposited on trees and vegetation like fallen snow’. Remember that cold weather can affect your health and crops. .”

Several users who left comments in the posts appeared to have been misled by the claim.

Another netizen said: “Heavy rain, freezing in the summer, the weather is going crazy.”

The claim, however, is false.

A keyword search on Google found the matching tweet posted by the KMA on October 17, 2021.

The tweet and images included match those shared in the misleading online posts.

Below is a screenshot comparing one of the misleading posts (left) and KMA’s original tweet (right) with the date of the tweet shown in blue: 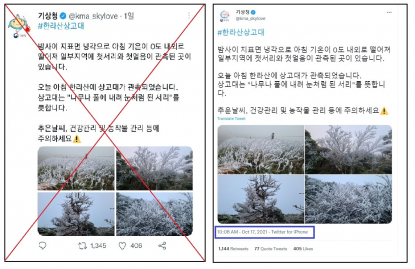 Local news agencies at the time also reported on the frost found on Mount Halla in October 2021, including here and here.

A KMA spokesperson from the agency’s Jeju branch told AFP that claim “was not true”, noting the temperatures and weather conditions in the mountain.

“The first frost or frost of the year is unlikely to have formed on Mount Halla,” the spokesperson said Aug. 19.

“On Mount Halla’s Witse Oreum and Baekrokdam, where we operate automated weather stations, temperatures were 18.3 degrees and 17.4 degrees Celsius, which are not conditions in which ice can form. .”

The spokesperson added: “On the 17th about 217 milliliters of rain was detected on Mount Halla, so ice could not have formed under these conditions.”

Mount Halla was hit by around 300 milliliters of rain per hour on August 17, and heavy rain damage was reported in various parts of Jeju Island, according to local reports here and here.

AFP found no credible reports or announcements regarding the detection of frost, ice or snow on Jeju Island in August.