WASHINGTON – Nine days. It’s all that’s left of winter. The vernal equinox officially arrives next Sunday, and it looks like winter is determined not to pass quietly.

Mike Thomas has the FOX 5 weather forecast for Friday, March 11

Friday will actually be a beautiful spring with sunshine and temperatures reaching the 60s, but winter will start to return after midnight tonight.

Rain showers are expected to begin rolling into the area east of I-81 after midnight tonight. Temperatures will likely be in the upper 40s and lower 50s across the region, so any rain is expected at the start.

The rain will intensify as a southern storm system begins to strengthen and push north toward our beaches. Saturday’s high temperatures will be settled before the sun rises. 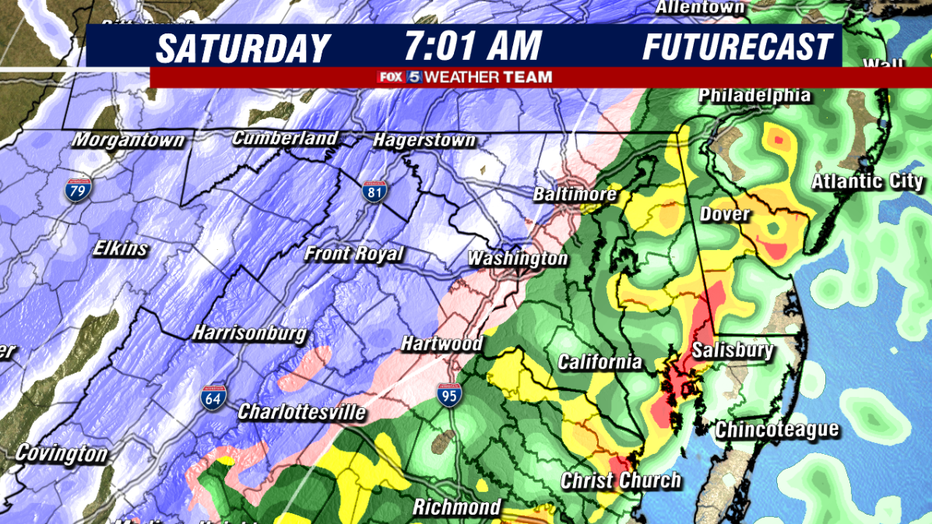 Around sunrise, temperatures begin to drop. The timing of this cooling will be absolutely critical to how quickly the rain transitions to a period of snowfall, but most weather forecasts suggest it will likely occur between 7 and 9 a.m. Saturday morning along the I-corridor. 95, earlier for these areas. northwest of DC

Rain will continue across southern Maryland and the east coast at this time, but will increase in intensity.

Mike Thomas has the FOX 5 weather forecast for Friday, March 11 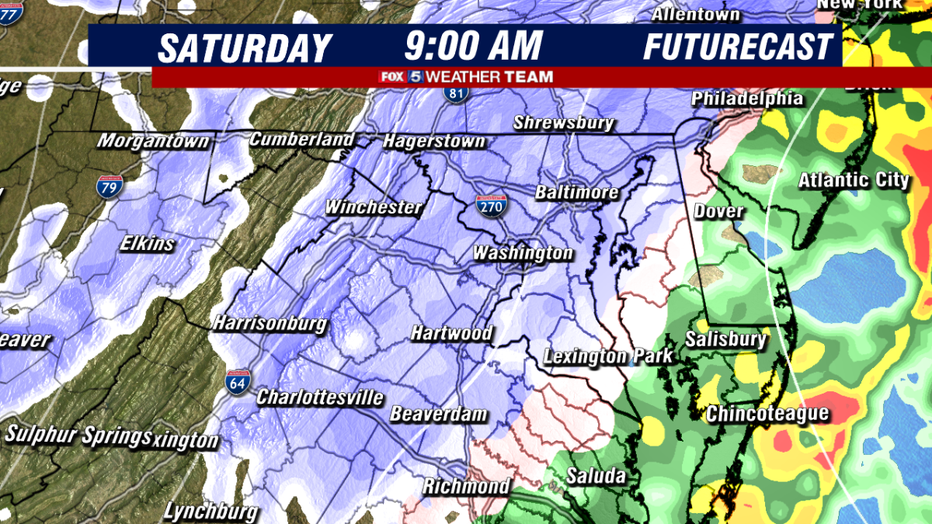 By mid to late morning, most of the region transitions to winter precipitation, with snow around DC and the I-95 corridor, with mixing expected in lower southern Maryland and the Northern Neck.

Moderate to heavy snow may fall for some time. As we head into the afternoon, the system should begin to pull away. Flurries and maybe a snow squall or two could persist well into the early evening hours as an upper trough moves through the region.

Winds will become very high, potentially at damaging levels, with gusts of over 50 mph possible as the storm intensifies as it moves away. Temperatures will continue to drop throughout the evening and into the night. 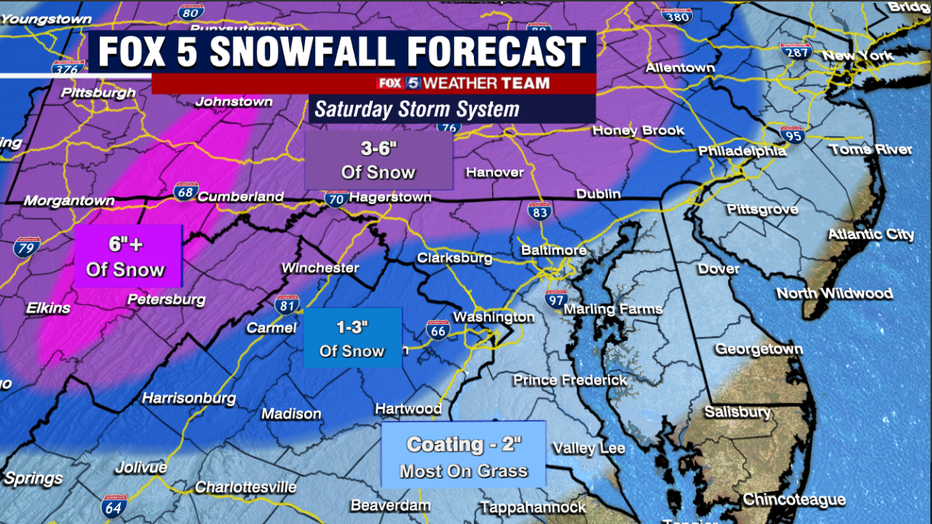 It is extremely difficult to spot accumulations in a rain-to-snow situation. It’s twice as difficult during the month of March, when warm ground temperatures and a high angle of sunshine can all impact how much snow is able to stick.

With marginal temperatures after the transition, it will be a wetter variety of snowfall. Much of it will melt on contact, especially on paved surfaces. Accumulations will be highly dependent on snowfall rates.

Anything too light would simply fall as “white rain” that melts on contact, while heavier rates could rise an inch or two. Pavement pre-treatment is unlikely to be too effective, as heavy rain overnight could wash away any salt or chemicals that are on the pavement.

While we don’t anticipate any unlikely issues on the main roads, watch out for some of these less traveled secondary roads to get muddy pavement. Luckily, this all happens on a Saturday morning, when the traffic is much lighter than on a weekday. 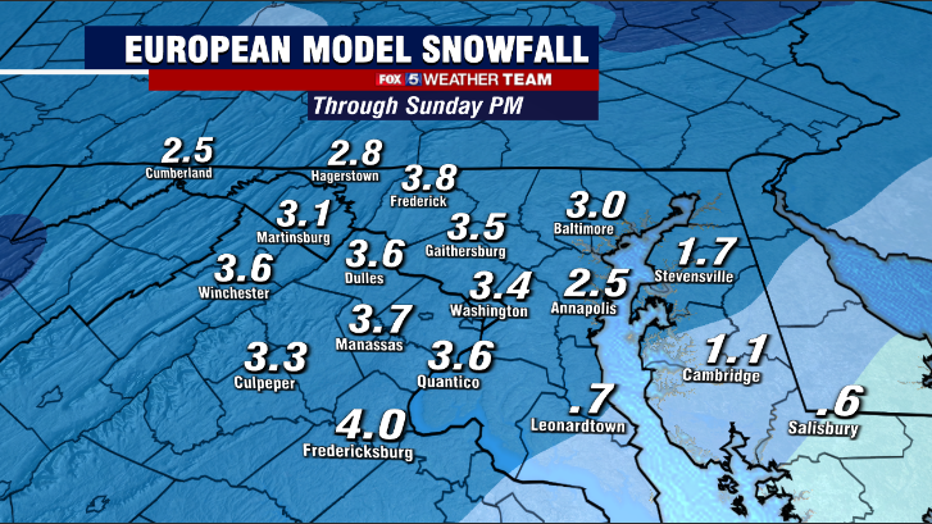 In most areas northwest of the city we are expecting 1-3″ of snow, again mostly on grassy and elevated surfaces. Some areas scattered this way may pick up more. Around DC we are expecting more. expect up to 2″ snow cover and expect most of it to be confined to grassy areas as well.

That being said, we have some weather models this morning suggesting that the amounts could be a little higher than expected. This morning’s Europe (shown above) indicates the potential for more than 3″ of snowfall in Washington, which would make it the second highest snowfall of the winter if true. 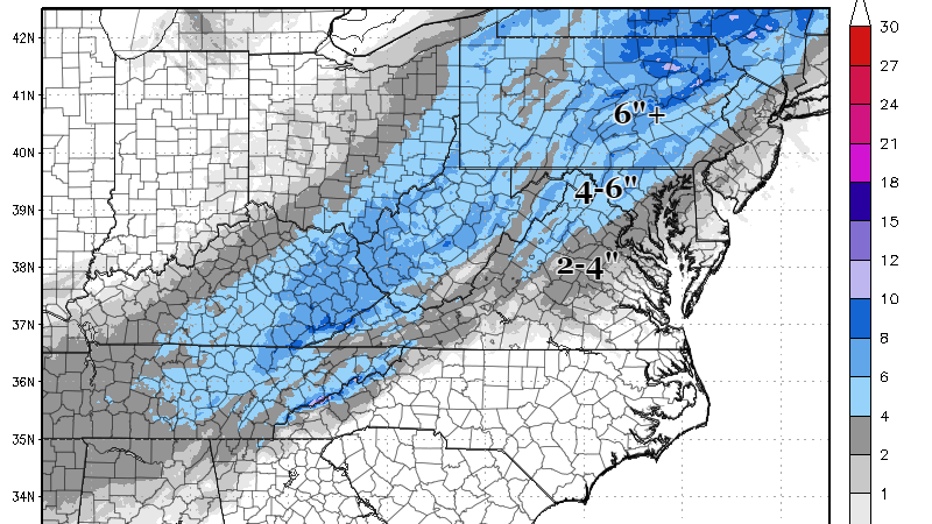 The National Weather Service is also closely monitoring the model guidelines. They rely heavily on a model known as NBM, the National Model Blend, which is basically a mix of models and ensemble guidance to create a forecast.

Recent runs of this model have suggested up to 2-4″ in the DC region, with up to 4-6″ along the I-66 and I-270 corridors. This would likely be a high end or “boom” scenario for snowfall in the area.

But there is the threat that as the upper level features with this storm system move through, there could be another heavy flurry that could surprise some people and drop an inch or two rapids. 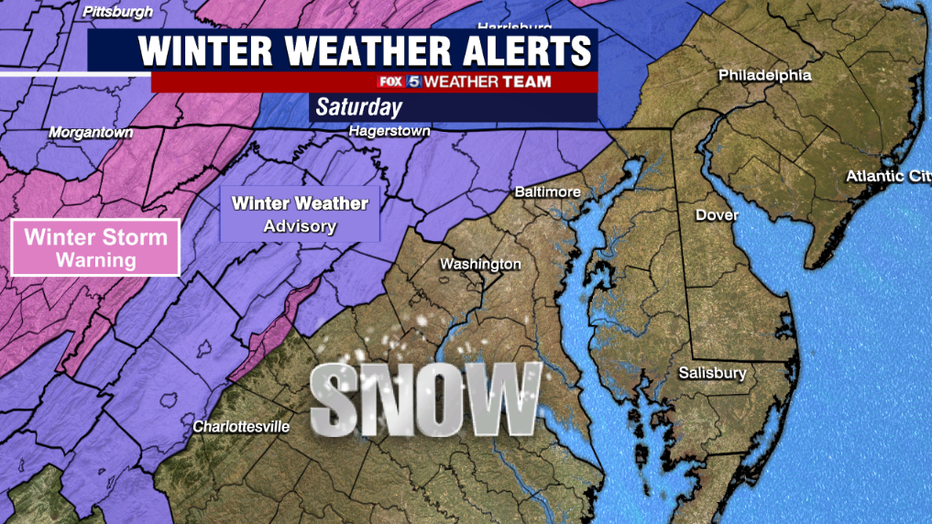 Winter weather advisories were issued this morning to cover areas most likely to see disruptive snow accumulations. Parts of Montgomery, Loudoun, Howard and Fauquier counties have all been included in this advisory.

We suspect DC and Baltimore will be included in a winter weather advisory update later this afternoon, based on some aggressive morning guidance that has arrived. Winter storm warnings are in place for some of our mountainous regions, where more than half a foot of snowfall will be possible in high areas. 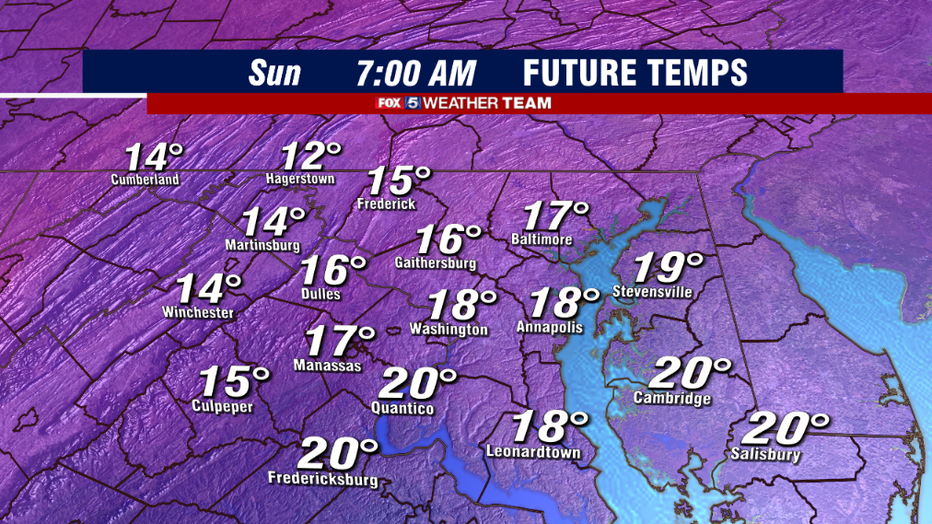 While the snow will be all over the headlines, one of the biggest stories from this storm will be the sudden drop in temperatures.

They’ll be falling all day Saturday, and we’ll probably be in our twenties by Saturday night sunset. Winds will be extremely gusty, possibly even damaging, as gusts could roar to over 50 mph. Wind chills if you are out on Saturday night will be in the teens and in the single digits.

But on Sunday the winds will start to ease, but temperatures will drop to the teens as skies clear up on Sunday morning. Sunday will be a wintry day, with temperatures in the teens to start and the 40s in the afternoon. 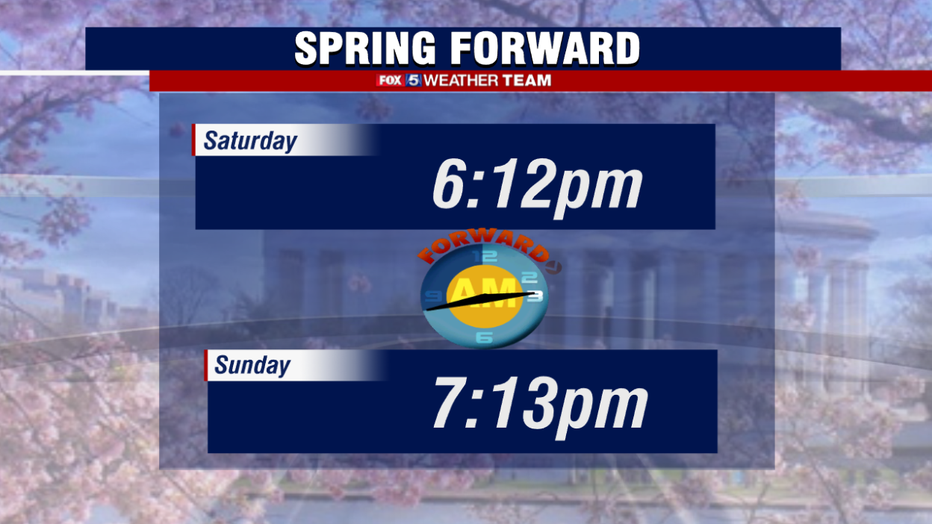 Speaking of weekends, it’s actually the last full weekend of winter! And that means it’s time to put those clocks forward one hour Saturday night before you go to bed. Starting Sunday, the sun will set after 7 p.m. as we revert to daylight saving time.

More good news in the last work week of winter should look a lot more like spring! The 60s are back on Monday afternoon and are expected to stay there until next weekend and probably the following week as well. This storm really looks like the last punch of winter!

The last breath of winter? Here is the latest snow forecast