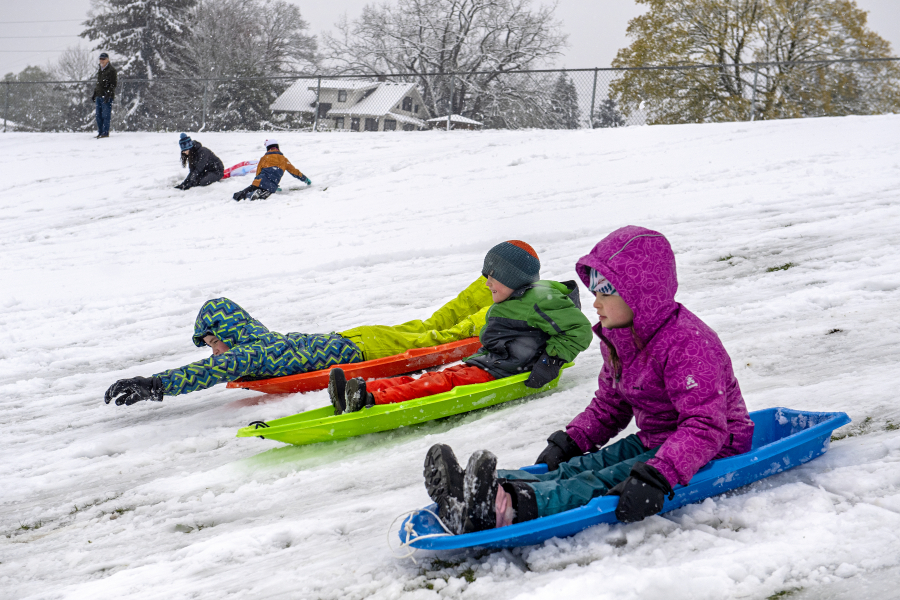 A heavy snowfall slid across northwestern Oregon and southwestern Washington early Monday, confusing locals as they opened their curtains to see a brilliant blanket of snow on the ground.

Knowing that the lifespan of spring snow was fleeting, people took to the hills or their lawns to take advantage of the unexpected weather. The Brownfield children were among the first to spot the scene and run outside to play.

The four children woke up at 5:30 a.m., came out soon after, and stomped in the crisp snow for hours. Betsy Brownfield watched as her children raced breathlessly up the hill behind Franklin Elementary with their sleds in tow. Their stamina and energy were unmatched.

The hot chocolate was an afterthought.

Although the children of Brownfield usually can’t resist waking up early, seeing the heavy snowfall outside sparked a special jubilation in them.

“They were especially excited to get up this morning,” she laughed.

Emmaus, 11, and his siblings Alastair, 6, Amira, 9, and Rainier, 4, started the morning by taking their chickens on a sled around the yard and introducing Mr. Tinker Topper, the snowman freshest in the neighborhood, to the real world.

The most eventful snow activity, however, was the competitive luge race which pitted siblings against each other. Emmaus bumped into Alastair’s sled as they battled for first place as Amira sneakily passed them to secure the winning position. No matter who was more triumphant, they were just happy to be sledding for the second time this year.

Brownfield’s mother, Phyllis Lamp, was from Indiana, where they experienced 60-degree temperatures. The thick snowflakes and cold Vancouver weather were unexpected but more than welcome.

“I quite appreciate that, though. I love the snow,” Lamp said.

Sara Wilhelm and her twins Haruki and Fumiki Otomo, 9, strolled past snowy swings early in the morning at Lincoln Elementary. They were surprised how long the white blanket stayed on the ground, especially as the snowflakes continued to add to its depth.

Much to the dismay of the children, the snowfall quickly turned to rain and slush, cutting short the sledding races and the lives of the snowmen.

The mid-April morning could easily have been mistaken for a December day – the sky was pristine white and the air left a painful tingle on the cheeks. However, semi-buried hyacinths and tulips scattered across patches of green grass disrupted the winter illusion, as did rapidly melting snow.

The emerging buds created a precarious situation for the tree branches, as the young leaves caught the sticky snow too effectively, weighing down the branches. Some branches took on a hanging appearance; others have come loose from the trunk.

The National Weather Service latest snow totals reported that areas of Clark County received nearly 7 inches of snow. It was the first measurable snowfall recorded at Portland Airport in April, according to the the service’s Twitter page.

For the rest of the week, there may be a mix of rain and snow, but snow accumulations shouldn’t exceed half an inch, said meteorologist Jon Bonk.

Forecasters are warning commuters in northwest Oregon and southwest Washington to be aware of road conditions. Temperatures will become cool enough in the evening to refreeze the melted snow, turning it into black ice.