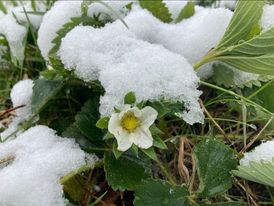 Here in Green Ridge, snow falls heavily just after dawn. The squirrels don’t seem to care, awkwardly jumping between the green branches covered in white. The robins don’t seem to care, still fighting in the backyard. The cows and donkeys across the street aren’t surprised either. Very little will deter them from enjoying the fresh grass and hay.

But humans have been betrayed.

The snow in April is terrible, ”said Anne of Ingleside in the famous book of the same name by LM Montgomery.

“Like a slap in the face when you expected a kiss.”

We regret (every two years) that this the snow of the year is too much late too cold and out of the natural order of things. Perhaps even a sinister sign of climate change. But in fact, late spring snow has been part of the human experience since ancient times. This is reflected in our literature, music and folklore all over the world.

The Farmers’ Almanac refers to a cold snap in late spring as “the dogwood winter.And notes that the local names of the meteorological phenomenon generally reflect the tree or shrub that blooms mainly in the region: the winter locust. Redbud winter. The winter of blackberries. Blackberries, in particular, are more fruitful if subjected to a period of cold weather, and therefore this name has stuck in many regions. Some places in the Appalachians and the deeper south recognize them all, claiming four or even five “little winters.” Far from rare, the Almanac notes that a blackberry winter weather event historically occurs in about 50 percent of years.

In the 20th century, the winter of blackberries was the subject of both lyrics and song. He is the name of the group who recorded the soundtrack to the drama Hillbilly Winter’s Bone and a mid-century jazz standard. This is the title of the autobiography of anthropologist Margaret Mead and a famous news from the time of the Depression.

Further than that, an early fall or late spring snow was commemorated in folklore as “poor man’s manure,” and wise farmers plowed it in their fields. Modern science has confirmed what our ancestors observed: snow contains nitrogen. Blackberry winters were recorded in newspapers in the 1800s and in gentleman farmer journals of the 1700s. Future President George Washington noted on May 4, 1774: “very cold and spitting snow all day with strong wind blowing in NoWest.

Even in ancient times, the winter of blackberries was noted and mythologized. In Vietnam, Rét nàng Bân (Miss Ban’s Winter) tells the story of an unhappy housewife whom the Jade Emperor has pity, extending the winter to complement her husband’s braided shirt. Today, a March snowfall in Vietnam is anthropomorphized under the name “Miss Ban”.

Our dismay at the snow in late spring is justified. A severe frost this week will kill tender plants and flowers in orchards in many parts of the country, crippling small farmers and making locally grown fruit scarce. We should pray to Saint Dorothy, patroness of fruits and flowers, that God will spare at least some of this beauty and generosity. But of all God’s creatures, modern man is the only one whose memory is short enough to be surprised by the winter of blackberries. As we watch the April snow fall, let it be a humble reminder. In all the modern glory of mankind, we still forget the reality of the seasons. We are powerless in the face of Mother Nature’s whims. We are still completely dependent on the Lord’s mercy.