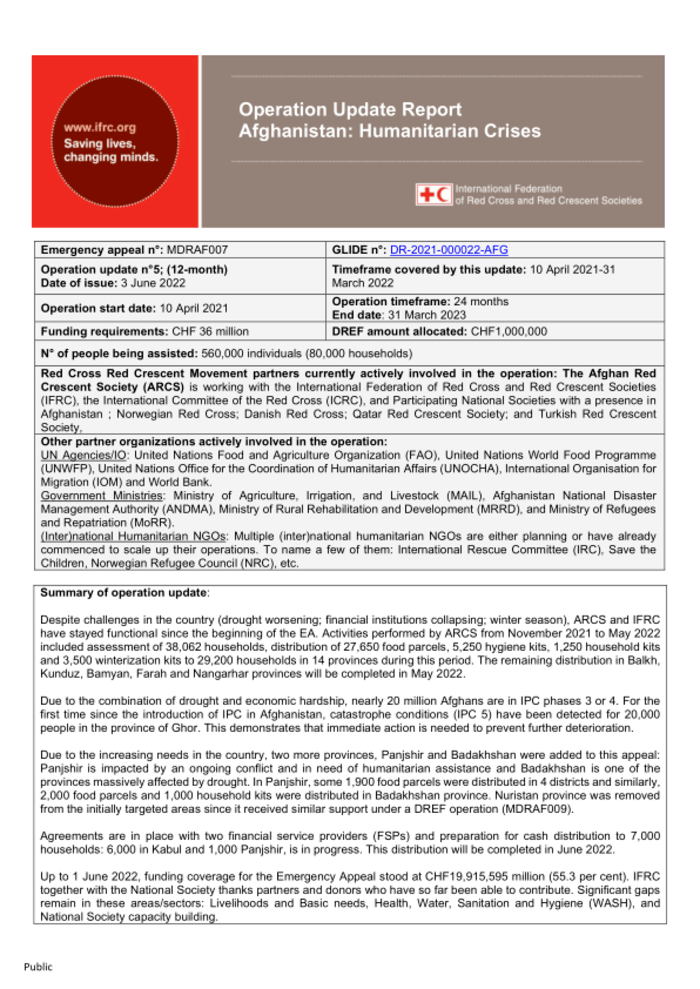 Despite the difficulties encountered in the country (worsening drought; collapse of financial institutions; winter season), ARCS and IFRC have remained functional since the beginning of the EA. Activities carried out by ARCS from November 2021 to May 2022 included the assessment of 38,062 households, the distribution of 27,650 food parcels, 5,250 hygiene kits, 1,250 household kits and 3,500 wintering kits to 29 200 households in 14 provinces during this period. The remaining distribution in the provinces of Balkh, Kunduz, Bamyan, Farah and Nangarhar will be completed in May 2022.

Due to the combination of drought and economic hardship, nearly 20 million Afghans are in IPC Phases 3 or 4. For the first time since the introduction of the IPC in Afghanistan, disaster conditions (IPC 5 ) were detected for 20,000 people in Ghor province. This demonstrates that immediate action is needed to prevent further deterioration.

Due to the growing needs in the country, two more provinces, Panjshir and Badakhshan have been added to this appeal: Panjshir is affected by an ongoing conflict and needs humanitarian assistance and Badakhshan is one of the provinces massively affected by drought. In Panjshir, some 1,900 food parcels were distributed in 4 districts and similarly, 2,000 food parcels and 1,000 household kits were distributed in Badakhshan province. The province of Nuristan was withdrawn from the areas initially targeted because it received similar support within the framework of a DREF operation (MDRAF009).

Agreements are in place with two Financial Service Providers (FSPs) and preparation for cash distribution to 7,000 households: 6,000 in Kabul and 1,000 in Panjshir is underway. This distribution will be completed in June 2022.

As of June 1, 2022, the financial coverage of the emergency appeal amounted to 19,915,595 million Swiss francs (55.3%). The IFRC and the National Society thank the partners and donors who have so far been able to contribute. Significant gaps remain in these areas/sectors: livelihoods and basic needs, health, water, sanitation and hygiene (WASH) and National Society capacity building.

Given the planned expansion of humanitarian assistance to be covered by ARCS, the National Society requested the IFRC to revise the Emergency Appeal (EA) and its operational strategy. The EA amendment is underway and a revision is expected to be released by mid-June 2022.

The IFRC and ARCS call on partners and the international community to show support and solidarity by contributing to the emergency appeal. Funding is essential to enable ARCS to provide emergency assistance to children, women and men who have been affected by the severe drought compounded by displacement and who urgently need access to health care. emergency health.

A. ANALYSIS OF THE SITUATION

Description of the disaster

The situation in Afghanistan remains very fluid after the change of government in August 2021. The country is going through a process of change, and the situation is expected to remain fluid in the coming months. Along with political change, the combination of natural disasters, severe drought, floods and the COVID-19 pandemic has increased humanitarian needs exponentially. The security situation remains unpredictable, with reports of improvised explosive device (IED) explosions across the country, resulting in injuries and deaths among civilians and personnel of the Islamic Emirates of Afghanistan.

In 2021, 698,000 people were displaced by the conflict and nearly one million returnees from Iran and Pakistan were registered. The UN has issued a flash appeal for $4.4 billion to further accelerate humanitarian assistance. However, the demand for humanitarian funding continues to be unmet. By the end of 2021, the number of people living in poverty has increased to more than 90% of the population.

The Food Security Cluster has reported that the La Niña phenomenon is currently prevailing until spring 2022. Conditions are not expected to begin to weaken until spring or summer. Below average precipitation was observed from December 2021 to February 2022 and below average snowfall resulted in below average snowpack during the winter months which will negatively impact the availability of water for irrigation in spring and summer. The continued drought will lead to a reduction in wheat cultivation and create more insecurity in access to food, weaken the production of agricultural products and have a negative impact on the health of livestock as well as the adaptive capacities of the farmers.

According to the latest IPC1 report of May 2022, approximately 19.7 million people (47% of the population) are experiencing high levels of acute food insecurity (IPC category 3 and above), of which 20,000 are facing disaster levels. (IPC category 5). From June to November 2022, the harvest season is expected to improve slightly but remains dire for most of the affected population. Most of the reduction in food insecurity is due to humanitarian food aid, which will not be sustainable as aid is expected to drop from 30% to 8% in the second half of the year.

Even before changes in the country’s administration, the Afghan economy was collapsing under the Covid-19 pandemic, drought, escalating conflict and loss of investor confidence. Most development aid has come to a halt with restrictions imposed on funding and the smooth flow of cash in the country. The most obvious and direct cause of the problem which immediately affected the population was the freezing of the National Bank’s reserves which led the central bank to run out of liquidity and, consequently, the workforce (public sectors and private) in Afghanistan is unable to withdraw money even up to limited amounts, inflation is skyrocketing and many are on the brink of starvation.

Disruption to the health system due to the freezing of funding by the World Bank, the Sehatmandi Project, a multi-donor funded project that worked to increase the utilization and quality of health, nutrition and planning services through more than 20,000 health workers in 2,309 health facilities, had revolutionized health services in the country. In rapid response to this, WHO and UNICEF, with funding from the UN Central Emergency Response Fund, are supporting implementing agencies until the end of 2022. The fourth wave of the COVID-19 outbreak is currently expected, while there is still a lack of funding for the operation of designated COVID-19 hospital functions. There is a significant increase in COVID-19 cases in January 2022 compared to December 2021. In October 2021, outbreaks of cholera and dengue fever were detected in Kabul, Wardak and Nangarhar provinces. Measles has been reported nationwide and is a major public health problem. Acute Watery Diarrhea (AWD) cases have also increased in Kabul since October 2021. AWD is the second leading cause of death nationwide. Recently, cases of malaria have been reported in Laghman province.